How (and why) I finally got Freiburg, Germany into a novel 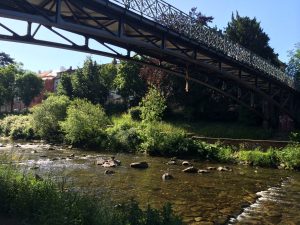 It has been three years since I last went to Freiburg, Germany. Since then, I’ve been trying to find a way to get that southwestern German city into a novel. After some trial and error, I finally did. Freiburg is in Amiga. Here’s how and why (with some minor spoilers ahead).

Actually, I wrote about Freiburg, West Germany because it plays a role in the 1985-1986 sections of the book. One of my characters is in the US Army during the Cold War 1980s when Russia thought the best way to get at the United States and its allies is with soldiers, tanks, and nuclear weapons. (Social media and Internet hacking hadn’t been invented yet.) This character is stationed in Stuttgart, but he has been making lots of side trips to Freiburg, as indicated in post cards he sends to his girlfriend back home:

I looked at the bottom for a description of the church in the photo. “Freiburger Münster.” I stuck it next to his other postcards from the Schwartzwald, the Schlossberg, and a water-filled channel in the middle of a street called a Bächle.

(Not to give too much away, but she’ll eventually find out why she has been getting all those post cards from Freiburg.)

Including a European city in an Amiga novel is appropriate because Commodore enjoyed tremendous success there in the 1980s and early 1990s. While the Amiga had a hard time jostling with the PC and Macintosh in the US, it was well accepted in Europe. Even today, Europe still has dedicated Amiga users.

But it was important to me personally to include Freiburg in a novel because my two business trips there were incredible experiences. Visiting another country, immersing myself in a different culture, enjoying a different cuisine (even McDonald’s there was different), and feeling both like an outsider and welcomed as a guest, these were life-changing moments for me. These are things an author wants to write about. If I could write about getting robbed and tied up at gunpoint at Carl’s Jr. (which also inspired a scene in Amiga), I can write about happy things too.

But I think about Freiburg with some sadness as well. I know it’s an experience I may never have again, or at least not for a long time from now.

It’s not just that my company is tightening the travel budget. It’s now getting harder to travel. The EU is looking at increasing travel requirements. I’m no longer sure from one day to the next whether I should put my laptop in my carry-on bag or check it in with my luggage. At the airport, will I be greeted with open arms (by the TSA with their blue rubber gloves)? Will I be ordered to show officers my social media feeds, which will guarantee that my next trip will be to Guantanamo?

More importantly, how do I defend my country to Germans now? How do I talk to them about a president I didn’t vote for, whose policies I don’t agree with, and tweets stuff like this at 3:40 in the morning?

We have a MASSIVE trade deficit with Germany, plus they pay FAR LESS than they should on NATO & military. Very bad for U.S. This will change

The Germans have always looked at us positively, even when we were at war with them. How would they look at us now?

Amiga is about a novel about people dealing with their pasts. For some, it’s a past they want to forget. For others, it’s a past they wish they can go back to but can’t. But we can take our pasts out once in a while, reminisce about happy experiences and recount the lessons our good and bad moments taught us.

My visits to Freiburg are now among the moments in my past. Even if I go back there in the future, my experience will not be the same. At least I can write about them.