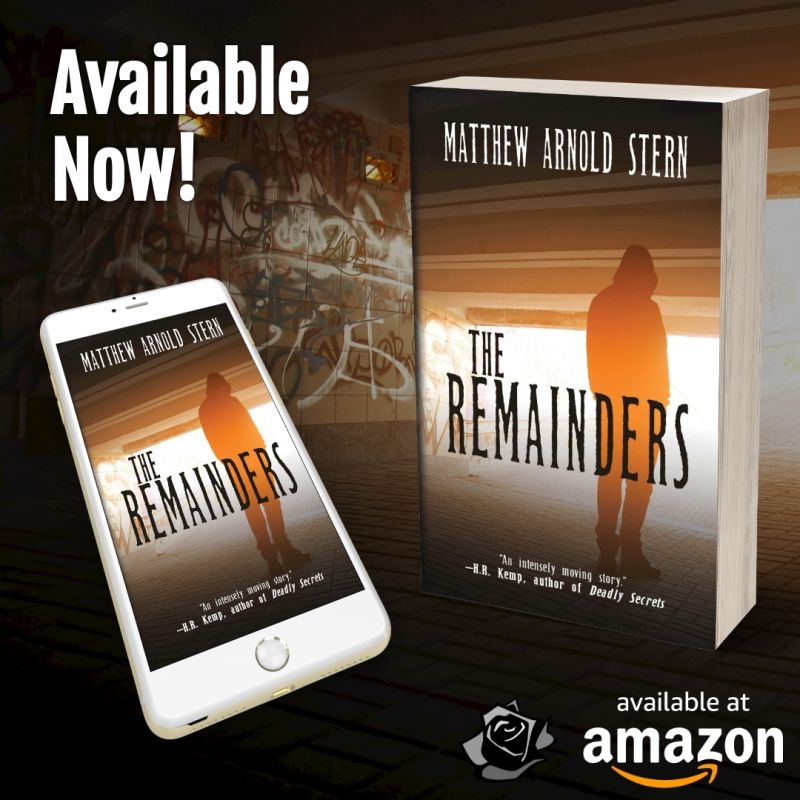 The Remainders is about a homeless son and troubled father who have become separated in Southern California. They must reconnect before their inner demons destroy them. It is available now from Black Rose Writing.

What is The Remainders about?

Dylan Glass, an 18-year-old high school dropout, has been kicked out of his mother and stepdad’s palatial house. Now homeless, he sleeps in his SUV behind an abandoned movie theater in an aging San Fernando Valley suburb. Although he has a job at a dollar store and support from the people he meets, he finds himself challenged by old temptations and a new woman, the alluring and enigmatic Pearl.

Miles away in Orange County, his estranged father, Dr. Oliver Glass, struggles with demons of his own. A private practice and a beautiful girlfriend with children of her own can’t make up for a past of tragedy and abuse. Memories of long-ago terrors constantly haunt Oliver.

Oliver seeks to reconnect with his son. Dylan seeks love and acceptance. Can they overcome their painful pasts? Or will they surrender to their self-destructive urges? Find out in the new adult novel that has been called “an intensely moving story” and a “powerful page turner,” The Remainders.

Here is a reading from a preliminary draft of The Remainders.

This book depicts suicide and abuse, which may disturb some readers. If you or someone you know is threatening to commit self-harm, call your emergency service number (9-1-1 in the United States) immediately. For additional assistance in the United States, contact the National Suicide Prevention Hotline by calling 1-800-273-8255 or visiting https://suicidepreventionlifeline.org.

What are people saying about The Remainders?

Check out this advance praise! 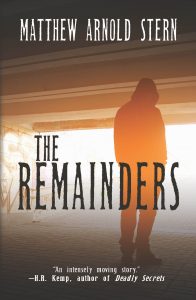 “An intensely moving story. Matthew Arnold Stern has created a complex and believable cast of characters…I enjoyed this story immensely. The writing style keeps the reader involved and guessing, while eagerly wanting the characters to find what they need. It is well told, and the gentle romance is so real and touching. Overall, it is a moving tale. I highly recommend this story. It’s a great read and I look forward to reading more novels by this author.” — H.R. Kemp, author of Deadly Secrets

“In this powerful page-turner, the reader is drawn to the familiarity of family pain and discord. Throughout it, the revolving inference of family history and circumstance sets the underlying tone and the ultimate hope for change, love, and acceptance. Matthew Arnold Stern weaves his diverse characters’ plights, emphasizing how kindness sparks community in a harsh world. Told in multiple first person, Stern engulfs the reader into the plight of his characters, both separate, lost, and trying to find themselves, but ultimately each other. I hope to read more of his work.” — Maisy Menold

“A father and a son struggling to find a role, a meaning, a way to live in modern America. A fascinating story about real, next-door people.” — George Pratanos, author of the upcoming novel The Unwanted Dead

“Stern takes us on a father and son’s restless journey filled with heartbreaking and hilarious turns, and, ultimately, blistering revelations.” — Dan Kopcow, author of Worst. Date. Ever. and the upcoming Prior Futures.

Where do I buy The Remainders?

The Remainders is now available in paperback and Kindle formats. You can purchase The Remainders online from your favorite bookstore and retailers.

If your local bookstore doesn’t carry The Remainders, ask them to order it.

Want to learn more about The Remainders?

On my website, you can read posts about the evolution of this novel from its start as a Fun A Day Reseda project in 2016. These posts are in The Remainders category.

On TikTok, you can watch videos of my readings and learn more about the book. Here’s an example.

Let’s take a tour of one of the settings in my novel The Remainders, Heroes Park in Lake Forest, CA. #booktok #authorsontiktok #blackrosewriting

Listen to the music that inspired The Remainders

On Spotify? Listen to my playlist of music that inspired the book.

Want me to speak at your bookstore or author event?