An Amiga of my own 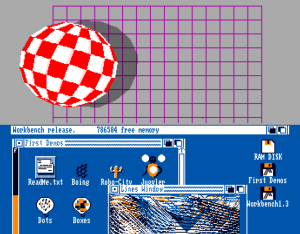 My novel Amiga will be published by Black Rose Writing on November 27, 2019. I will describe my publishing journey in a series of posts. This is the sixth of the series.

I sold my Amiga 500 in 1991. I was working for AST, a maker of PC-compatible computers. I could tell that the PC was the future, and how I could pass up owning a computer I helped create (especially with those employee discounts). Still, it was hard to part with that Amiga.

Twenty-five years later, the Amiga became the inspiration for my novel Amiga. I had to relearn everything that I had forgotten. Fortunately, I found plenty of videos on YouTube with information along with channels dedicated to supporting this computer. The more I brought myself back into the world of the Amiga, the more I wanted one of my own to replace the Amiga 500 I sold long ago.

You can buy an Amiga computer. You will find them in auctions on eBay or listed on AmiBay. On rare occasions, you can find them at Goodwill or come across one that someone threw into the trash. But those old Amigas are large and heavy, and they’re not fun to lug around to book signings. Old electronic components tend to leak, which is why Amiga enthusiasts recommend recapping, which is the process of removing old capacitors and soldering new ones.

But if you don’t have the room for an original Amiga or a steady hand with a soldering iron, you can get an emulator. This is what I decided to do.

The popular choice is Cloanto’s Amiga Forever because it contains the original Amiga ROMs and software. The Plus edition adds a number of games and emulation for the complete range of Amiga computers. The Premium edition also includes two DVDs full of videos that cover the history of the Amiga.

Amiga Forever is easy to install on a Windows computer, like the one my wife has, but I have a MacBook Pro. Fortunately, there is an emulator called FS-UAE for the Mac and other computers. With access to my wife’s Windows computer, I was able to use Amiga Forever to get a working Amiga emulator on my MacBook Pro. Here is what I did. (These instructions apply to Amiga Forever 8 and FS-UAE 3.0.0.) If you don’t want to read the technical stuff, you can skip to the demo.

Notice how the Workbench screen can be slid down to show the Boing demo, and both programs run at the same time. The capabilities of an Amiga wouldn’t be matched by Windows and Mac computers until years later.

This is just a glimpse of what this incredible computer can do. And if you want to learn how an Amiga computer changes the life of a programmer, look for my novel Amiga, coming November 27.