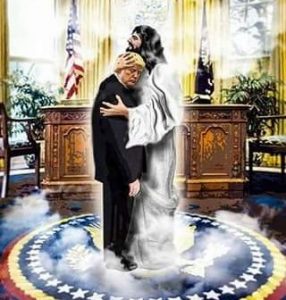 I’ve tried to follow my own advice and listen to what Trump supporters have to say. There is no shortage of them on Facebook and Twitter. I have found one issue that needs to be addressed. This issue resides at the core of American government and society. It is an area where we need to come to an agreement before we debate anything else.

Presidents aren’t chosen by Jesus to be his representatives on earth. They are not anointed with sacred oils and cloaked in the raiment of divine glory. We fought a revolution against that type of leader. Instead, presidents are citizens who swear or affirm before us as the American people to “faithfully execute the Office of President of the United States” and will to the best of their ability “preserve, protect and defend the Constitution of the United States.”

Our political system of checks and balances was designed specifically to limit the powers of individual leaders. No one person should be able to take control over the entire system, and leaders are accountable to the people. In Federalist Number 69, Alexander Hamilton explained this in terms that were not set to music. He made it clear that unlike the “divine right of kings” that they experienced with Great Britain, the President of the United States would not be above the law.

The President of the United States would be liable to be impeached, tried, and, upon conviction of treason, bribery, or other high crimes or misdemeanors, removed from office; and would afterwards be liable to prosecution and punishment in the ordinary course of law. The person of the king of Great Britain is sacred and inviolable; there is no constitutional tribunal to which he is amenable; no punishment to which he can be subjected without involving the crisis of a national revolution.

And what provides the checks on presidential power? The United States Constitution, which the president had agreed to preserve, protect and defend. It defines the separation of powers, freedom of speech and assembly, and other guarantees. So, when federal courts overturn travel bans, bills fail in Congress, FBI directors refuse to back off of investigations, and the opposition (whether it happens to be liberal or conservative) hammers away at every mistake the president makes, they are not being unfair or leading a witch hunt. They’re doing their job.

And so is the media. No president has ever escaped public scrutiny and attack. Not even George Washington. Abraham Lincoln was vilified as much in the North as he was in the South. On Saturday Night Live, Chevy Chase ridiculed Gerald Ford and Dan Aykroyd mocked Jimmy Carter long before Alec Baldwin took his swings at Donald Trump.

We have to knock our leaders down a few pegs, not to disrespect the office, but to remind them that they are citizens too. They are not superior beings who lord over us. They are tasked to carry out the duties that we gave to them. And when their term of office is over, they return to being ordinary citizens like everyone else. George Washington recognized this in his farewell address (which was set to music):

I anticipate with pleasing expectation that retreat, in which I promise myself to realize, without alloy, the sweet enjoyment of partaking, in the midst of my fellow-citizens, the benign influence of good laws under a free government, the ever favorite object of my heart, and the happy reward, as I trust, of our mutual cares, labors, and dangers.

So, let us agree that presidents don’t come from God. They come from the people with powers and limitations set by the Constitution. They are not exempt from scrutiny, and they are not above the law. When we can agree on that, we can look more objectively at the issues.