I Got Germanized, all right… 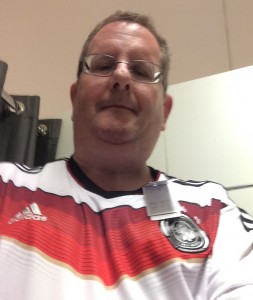 I went on another business trip to Freiburg, Germany. This second time around, I was able to explore more of the city, experience more of the culture, and learn more about the history. I tried this time, to borrow the name of a popular YouTube channel, to Get Germanized. Doing this was more challenging than I expected.

My limited German language skills proved to be a liability. I could get by without speaking German and was able to find English speakers everywhere I went. Still, I felt out of place. There were things I couldn’t do or didn’t feel comfortable doing because I didn’t know the language. Museums were hard because the exhibits had signs in German. Fortunately, I found a docent who spoke English and could explain things to me. I enjoyed browsing the many bookstores in town, but I couldn’t read any of the books. I just had to stand around and be impressed that Freiburg had so many bookstores.

Learning a language isn’t simply a matter of taking courses. One of the people I worked with in the Freiburg office is a Californian who moved to Germany years ago. He said it took him a couple of years to become fluent in German. He said that the need to learn German drove him to master the language. When you have to do something, you learn how to do it.

This is especially true in dealing with the subtle, yet significant differences between cultures.

One place where you definitely don’t want to go into the wrong place is the bathroom. I knew Germany had pay toilets, but the bathrooms in the department store didn’t have coin-operated locks. I knew the difference between “Damen” and “Herren,” so I went to the “Herren” room and took care of things. As I left the room, a man sweeping in the front of the bathrooms cleared his throat. That was when I noticed the plate with Euro coins on it. I had to look at the coins to determine how much I had to pay.

I learned three things about international travel from my trips to Germany.

First, learn the language. Even if you go to a place with plenty of English speakers, you will find yourself limited if you don’t know the local language.

Second, be aware of subtle cultural differences. They won’t appear in guidebooks or websites. You have to experience them to learn them. If you’re not sure, ask. (This is another place where knowing the language helps. Some of these cultural differences are best described with local terms that can’t be easily translated into English.)

Finally, embrace the culture you’re in. The joy of travel comes from stepping away from what is familiar and experiencing something new. As you learn about another part of the world and a different way of life, you may discover something new about yourself. This is why travel is worth the effort.