We will be judged 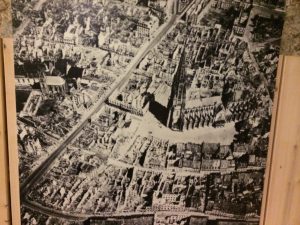 When I last visited Freiburg, Germany five years ago, I went to the Augustiner Museum. One of the things I saw there was this photo from the RAF bombing of the city on November 27, 1944. The raid destroyed several neighborhoods, killed 2,797 people, and injured approximately 9,000 more.

When I look at the news about migrant children who are separated from their parents and held in inhumane conditions, I think about Freiburg. I don’t think about the debate over what to call those camps. I think about people like us who are outside the barbed wire.

We like to believe the Holocaust was a unique event, a product of a uniquely evil leader and some unique inherent flaw within the German people. We consider the devastation brought upon them a deserved punishment. They had allowed themselves to become contaminated by an evil that can only be cleansed by mass destruction and a guilt they must bear as long as Germany exists.

While Germany continues to take responsibility for the Holocaust, as noted by the many memorials throughout Freiburg and other cities, we cannot take comfort in our sense of moral superiority. As we’ve seen in the nearly 75 years since the Holocaust, many other societies have shown the capacity for genocide. No one is immune. And that includes us.

Picture yourself living in Freiburg in 1935, two and a half years after the Nazis took over. You’re married with children, you have a good job, and your family is healthy and generally content. Hitler and his party are buffoons and thugs, but the economy does seem to be picking up, and he is giving Germans back their pride. You worry about the things Hitler says about Jews, but you write it off as rhetoric. He’s just referring to the criminals and Bolsheviks, not your friend Hansel with whom you served in the World War and Ilsa who taught at your children’s primary school until she lost her job. He wouldn’t do anything to law-abiding citizens like them, right?

Even if the Nazis are as evil as some people say, you figure that they won’t last. They are too incompetent and break too many laws. Our courts and political institutions will put them back in line. Our country has a long history of reason and civilization that those brutes won’t destroy. The people will come to their senses and reject them. Everything will be OK.

Now, look around you. Aren’t there things in the United States today that remind you of Germany nearly 85 years ago?

The Nazis didn’t become the Nazis all at once. Evil builds up in small doses. It maintains a sense of normalcy while filling your mind with increasingly despicable thoughts. You may consider yourself kind and compassionate. But eventually, you won’t bat an eye when an immigration officer argues that migrant children don’t need soap and toothpaste. At that point, the mechanism of evil ramps up until genocide becomes inevitable.

And so does judgement.

The photo showing the destruction of Freiburg should fill us with dread. So should the images of the shattered cities of the South in the Civil War and the lingering effects of colonialism and discrimination. Even if history is written by the winners, their crimes are not forgotten.

No one escapes judgement. Whether it comes from war, criminal trials, or the chronic pangs of a stained conscience, we will face the consequences of the good we failed to do and the evil we didn’t resist. We will stand in the court of humanity. How will we plead? What evidence can we provide in our defense? (We should know that “I was just following orders,” “It wasn’t my fault,” “What about those other people? They did worse,” and “The guilt of past generations doesn’t apply to me” aren’t valid excuses.)

This is why we writers must speak out for what we believe, and all of us must resist the rising evil around us. We must demand from our elected officials that such mistreatment end immediately. Those who ordered and approved it must be held to account. More importantly, we must shake our neighbors out of their complacency. It’s too easy to make a habit of cruelty. We must continue to fight against it.

Remember, silence didn’t save the citizens of Freiburg. It won’t save us when judgement comes.