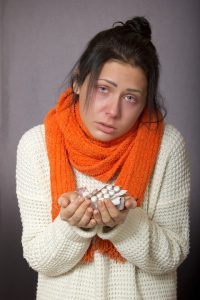 I came down with a cold. It’s a disease that isn’t really considered a disease (even though complications from it kill about 4,500 people per year in the US). But our response is to gulp down some medicine and go about our business. That’s what I tried to do the other day. At work, I had some deadlines and meetings. But when my boss saw me, she strongly suggested that I go home and get some rest.

I know it’s bad office etiquette to go to work sick, just like cooking fish in the microwave and not making a new pot of coffee when you finish the last cup. But I was struggling against something that has been programmed into me since when I was a child, “You gotta play hurt.”

This is not just a macho male thing. Mothers never feel like they can take a sick day. If you earn an hourly wage, sick time means time you’re not getting paid. When I worked in fast food in my late teens, I occasionally served my hamburgers with a side of immunity strengtheners. Even if you are paid a salary, sick time is discouraged. Taking too much of it can be a disciplinary issue.

At the same time, we laud those who give 100% when they physically can’t. Michael Jordan is considered a hero for playing sick.

However, forcing ourselves to perform when sick or hurt can have serious consequences.

The NFL is struggling with issues about concussions and traumatic brain injury. Although they have implemented protocols to deal with serious injuries, the pervasive “tough guy culture” is keeping players from getting the help they need. As Detroit Lions receiver Calvin Johnson said, “It’s a part of football. You get concussed, you gotta keep on playing.” People can also be perceived as being selfish and less of a team player by taking care of themselves. In the Star-Tribune, Seth Stohs commented about this in regards to a Vikings player’s injury.

Some thought he was being selfish for deciding not to play. Others say that he was looking out for himself and not the team or his teammates. Have we not seen enough video or stories of former NFL players that can’t play with their kids because they can hardly walk? How many times do we need to see Earl Campbell try to walk to realize that long-term health should be considered much more often than it is in the NFL.

This does not only apply to athletes. My mom went back to work too soon after her first stroke in 1979. She was afraid that she couldn’t support us on disability payments. Two months later, she suffered an additional series of strokes that left her paralyzed for the rest of her life.

We need to give ourselves permission to rest, to recover from illnesses or injury, and to take care of ourselves. Self-care is not selfish. If we don’t allow ourselves to heal, we might not be there for the people who depend on us. You don’t have to play hurt. You have to recover so you can play again.