School spirit and yearning for community

My novel The Remainders will be published by Black Rose Writing on September 2, 2021. I will describe my book in this series of posts. You can read other posts in The Remainders category on my website. 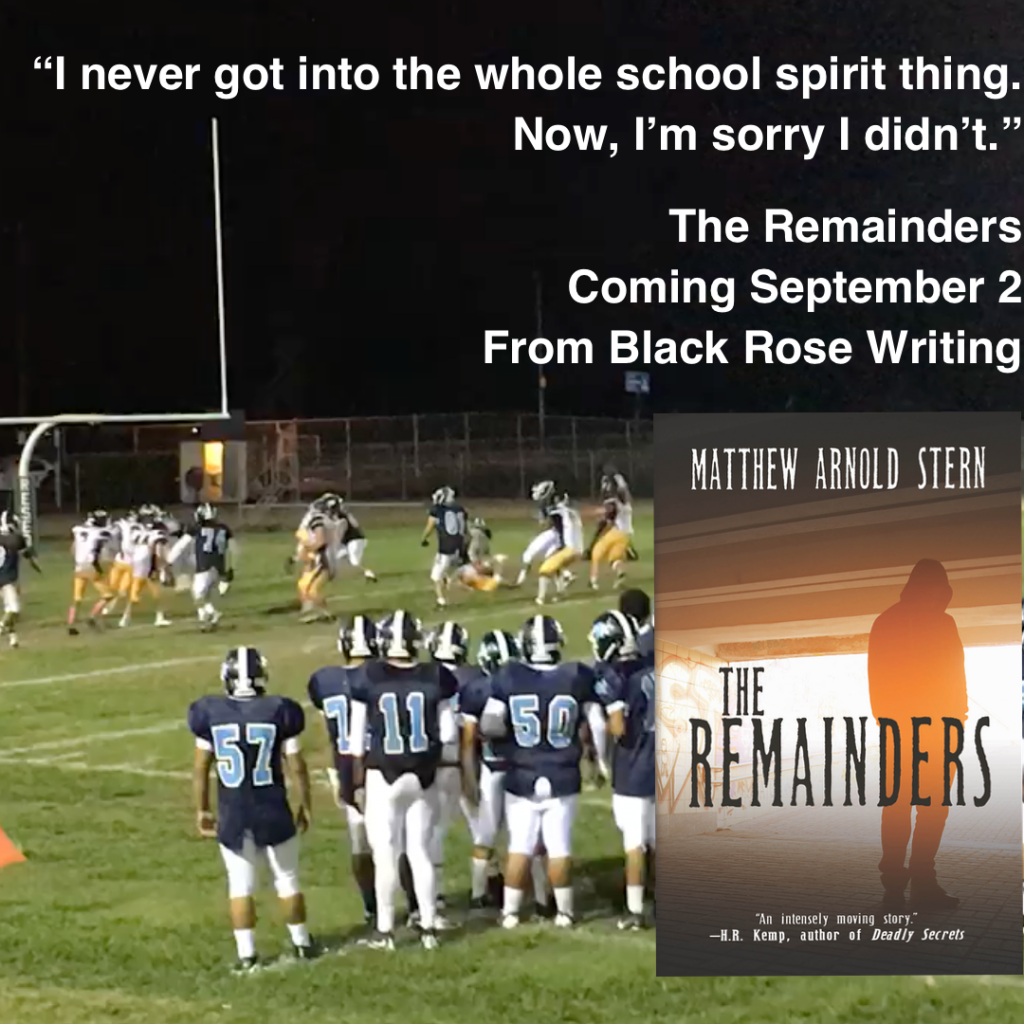 This is one of the quotes from The Remainders I’ve been posting daily on Twitter for #RemaindersAugust. If you aren’t following me on Twitter, do it now. I’ll wait.

I’ve written a lot about high school and how it has such an outsized influence on us. Even though it is only three or four years of our lives, they are the most formative. One reason is that it is the last time many of us have a sense of community.

High school is an imposed community. We have little in common besides we live in the same neighborhood and are around the same age. But schools, at least in the United States, provide the elements of community. We get school colors, mascots, and sports teams to root for. We transform from just being a bunch of teenagers who spend six hours at the same place every weekday into Regents, Chargers, Dolphins, Eagles, or whatever symbol the school’s administrators choose. This creates a powerful bond and sense of identity we carry through our lives. And if we endure some sort of horrible event or heartbreaking tragedy, those bonds grow stronger.

Not everybody accepts this type of community. In Amiga, Peter resists it:

High school was one giant stamping press. You were forced to conform, to fit in. You had to wear the right clothes, and have your hair the right length, and listen to the right bands, and watch the right movies, and take the right drugs, and use the right slang. You memorized history books full of lies, read authors who have been dead for centuries, and learned mathematical formulas you will never use outside the classroom. On Friday nights, you filed onto rickety metal bleachers where you pretended to care about other students, who you barely see in the hallway, as they wore ugly uniforms in garish school colors. You were supposed to cheer as they smashed into other students who happened to live in a different neighborhood from you. On Monday morning, you had to brag about what you did with some girl in the back seat of your parent’s car on Saturday night.

In The Remainders, Dylan feels disassociated from his high school for reasons you’ll have to see in the book. His sister Muriel was active when she was in school. He resented it at first, but he regrets missing out. This shows in the lead-in to that quote.

Muriel had lots of high school t-shirts too. Every team she played on gave some sort of shirt. She’d go to games for all the other teams, and she’d get those t-shirts too. Along with blue face paint so she could paint D and H for Dana Hills on her cheeks for all the football games. A picture of her with that DH once showed up in the “OC Varsity” section of the Orange County Register.

I never got into the whole school spirit thing. Now, I’m sorry I didn’t.

After we graduate high school, that community goes away. Those who go to college may find community from their school’s colors, mascots, and sport teams. Or join a fraternity or sorority. But those communities go away too. Eventually, we will be left on our own to start careers. If we so choose, we may find a partner and start a family. It isn’t the same as being part of a community where everyone shares the same identity and roots for the same things. And we miss it.

So, we look for community in different ways. We may find it rooting for a sports team. Or serving in the military. Or joining a religious institution. These days, many people seek community through politics by joining a political party, supporting certain politicians, and getting news from select social media and cable news outlets. Some want to build community by volunteering and getting involved in social programs.

There’s something in us that yearns to be a part of something. We want to find a place where we can belong and an identity we can embrace as our own. We want something to root for and victories we can feel are our own. Hopefully, it is through something fun and positive in a group that doesn’t dehumanize those who aren’t a part of it. That’s why I told the kids in our Little League years ago, “Inside the fence, we play hard to win. Outside the fence, we’re all friends and part of one community.” We can find community without hating others.

In The Remainders, you will find characters who create that type of community. I hope you’ll join our community of The Remainders readers starting September 2.