My novel The Remainders will be published by Black Rose Writing on September 2, 2021. I will describe my book in a series of posts. You can read other posts in The Remainders category on my website.

I cover a lot of subjects in The Remainders, including homelessness, past trauma, and my hometown of Reseda. One subject came up surprisingly in my book—baseball. It surprised me because of how much it came up and how it plays a role in the story.

If you’ve been following my website for a while, you know I was a Little League president in a past life. A lot of those experiences worked their way into my story. (If you were in Saddleback Little League in the late 2000s, relax. It’s not a roman-à-clef, and I’m not writing specifically about you.) I would like to explain one aspect of the story readers outside of Southern California might not pick up. It’s about the relationship between the Dodgers and the Angels. First, enjoy this picture from 2006 of my son and I dressed as Dodgers as we marched around Angel Stadium. 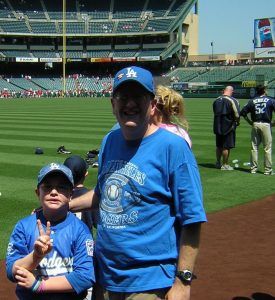 Growing up in Reseda, I was a Dodgers fan. We went to several games per season. Mom wasn’t much a freeway driver, but she was willing to get on the 101 to go to Dodger Stadium. She also got us loge seats on the third-base side and treated us to Dodger Dogs. We had many happy memories of watching Steve Garvey, Davey Lopes, Don Sutton, and the rest of the Dodger Blue.

Once in 1978, she decided our family would vacation in a far-off town called Anaheim. We went to Disneyland one day, and on the other, we went to a game of what was then California Angels. After years of struggling, the Angels were finally in contention. They played a close game against their then division rival, the Kansas City Royals. After the game, they let fans walk across the field. Mom remarked that the grass felt like carpet.

Those trips to the ballpark with Mom ended when she had a stroke. The last game we went with her was a Dodger game in 1980. We got wheelchair accessible seats, but the trip was too much for her, and we left after a few innings. I still miss those Dodger games with her.

When I moved to Orange County, the Angels became my home team. Regardless of what city name Arte Moreno puts in front of it, the Angels are an Orange County team. I am still at heart, a fan of the Dodgers I grew up with. It’s a love that was rekindled when they won the World Series last year. My son’s passion for baseball and the Dodgers has also been rekindled. We plan to go to several games this year.

In a novel split between Reseda and Orange County, I thought it would be fun to write about the division between Dodgers and Angels fans. The two teams aren’t bitter regional rivals like the Kings and Ducks in hockey. Because they are in different leagues, we only have a Freeway Series in the preseason and possibly a few games in interleague play. But if Dodgers fans in the LA area think about the Angels at all, they don’t take them seriously. I describe this attitude in this scene at the dollar store where Dylan works:

For the start of baseball season, we got a shipment of Wiffle balls and oversized plastic bats for the toy aisle, baseball night lights where the red paint wasn’t exactly painted on the stitches, and blue caps that were supposed to look like Dodger caps, except the L and A were screen-printed side-by-side. I stocked those next to the real Angels caps with the real Angels logo because nobody around here likes the Angels.

My other main character, Dylan’s father Oliver, is an Angels fan. He talks about growing up in Orange County as a baseball fan:

I wanted to play baseball so badly as a kid. I grew up listening to Angels games on KMPC radio and rooted for Nolan Ryan, Frank Tanana, Rod Carew, Bobby Grich, Don Baylor, and Lyman Bostock. It was a shame what happened to him.

Oliver wanted to use baseball to connect with his father. Sadly, he wasn’t able to:

I loved playing baseball. I wasn’t the best player, but I worked hard. My AAA coach, Coach Danny, said I was the most dedicated player on the team. We won the division championship that year. I didn’t make the All-Star Team, but I didn’t mind. The smile Dad gave me when he held my trophy was the happiest moment of my life.

“I wish you could have seen me play, Dad.”

He put the trophy down on the floor next to the old leather sofa and put his hand on top of my dirt-and-sweat stained baseball cap.

“Do you think we can go to an Angels game sometime?”

“Sometime.” He nodded and leaned back on the sofa. “Dad’s tired right now. Goodbye.”

My family talked about baseball as an heirloom. Mom was introduced to it by her father, who took her to games at Crosley Field in Cincinnati and then Gilmore Field when they moved to Los Angeles. I passed it on to our children, and I hope they can one day pass it on to theirs. Part of that heirloom are the rivalries and peculiarities of the teams’ different fan bases. In The Remainders, I plan to show that by talking about Dodgers and Angels—as well as the family and personal dynamics that can come from a little white ball.