Why writers must stand up for what they believe 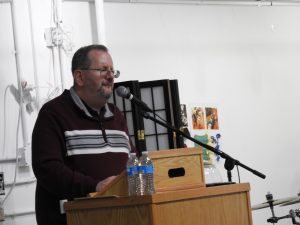 Politically divisive times like these are difficult ones to be a writer.

You want to express your beliefs, but you don’t want to be known as “the (insert label here) author.” You don’t want to alienate a chunk of your audience, but you know the true believers will get turned off anyway because they won’t accept anything that doesn’t perfectly align with their ideology. You know writers are the first to get cancelled, censored, and blacklisted (and if things go completely off the rails, arrested, tortured, and killed). But you don’t want to face your children’s and grandchildren’s accusation, “Why didn’t you speak out when you had the chance?”

I recognize it’s hard for writers to gather the courage to speak out for what we believe. We dedicate years, even decades, to give ourselves the opportunity to get in front of an audience. We don’t want to blow it by expressing an opinion. We have families to support and protect. We can’t afford armed security, lawyers, and social media experts. A single voice is the easiest for an enemy to crush. Or to sow enough doubt in that speaker’s mind to make them question themselves into silence.

This is why we as writers need to build ourselves into a community. We need to support each other and our right to speak freely without online and physical threats. We also need to support writers who don’t share our points of view. We can work with them to elevate the level of debate instead of shouting at each other, working with the facts instead of falling for conspiracy theories and outright lies, and coming up with solutions instead of seeking to own the other side. Remember, the real danger doesn’t come from those who have differing opinions. It comes from those who want to stifle all debate.

Part of that support comes from building enough courage to speak out. Someone has to take that first step — to sit at the front of the bus, to call BS, and to demand change. When one person steps forward, it makes it easier for others to build the courage to step up. As more people gather, it becomes easier for people to get off the fence and join. A single voice becomes many. Many voices become a crowd that is too loud to be ignored.

Authors are at the forefront of social change. We build images of a world we want to create and show dystopias we want to avoid. We elevate noble human traits and expose our worst impulses. We fill people’s imaginations with lessons of good and evil and how heroes can overcome villains by facing the foes within themselves. We cast a vote of confidence for humanity and give ourselves a reason to persist in the challenges ahead. Our voices are especially needed at times like these.

To do this, we must support each other as writers. We must defend our freedom of expression. Most important, we must have the courage to express what matters to us. The work we do is valuable, and the world needs our messages.