The first thing I ever wrote on an Amiga 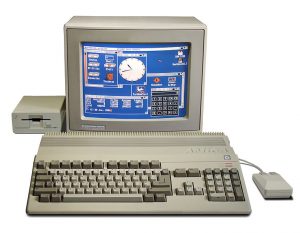 My novel Amiga will be released by Black Rose Writing on November 27, 2019. I have been describing my publishing journey in a series of posts. This is the tenth of the series.

As I was preparing for Indie Author Day and a video interview, I came across some old personal journals. One of them is the first thing I ever wrote on an Amiga. I wrote it the evening I took home my new Amiga 500. This journal describes my first impressions of the computer and provides a snapshot of what my life was like at the time.

In 1987, I had a Commodore 64, a Commodore 128, an Atari ST (which is a story unto itself), and a severe case of burnout. That year, I moved to Orange County. I tried to get my mom resettled here as well, but she developed blood clots in her leg, and it had to be amputated. I had a busy full-time job at AST and a growing side hustle writing for computer magazines—and I had a hard time keeping up with both. I was unhappily single and had weight and stomach problems. My finances were not in a great state, but I still went to Priority One Electronics, opened a credit card, and bought that Amiga 500. Here is what happened.

This is the first document I’ve ever written on my new Amiga 500. Appropriately, it is my Personal Journal.

As you can imagine, I’ve put off everything else to play with my new pride and joy. Since I brought it home at 1:00 this afternoon, I’ve been configuring my Workbench diskettes, installing WordPerfect, and playing Earl Weaver Baseball. When I’m not playing with the thing, I’m buying diskettes or software for it. Because of this Amiga, I’ve put off washing dishes, calling friends, and paying my bills.

The Amiga is not as simple a machine as I thought it would be. I figured it would be a breeze with all those pull-down menus and icons. As for CLI, well, I imagined it would pretty close to MS-DOS. Nope.

The Amiga is an entirely different machine. Its operating system isn’t like anything I’ve ever used. Even the terminology is different. Chip memory, gadgets, requester boxes. I’d just gotten used to “extended memory” at work! I have a lot to learn because I can start writing for AmigaWorld.

And if all goes well, I will be writing for them. I spoke to Bob Ryan last Thursday, and he sounded interested in my ideas. He didn’t go for the ST-Amiga connection feature. He told me very few Amiga owners also had STs (if that wasn’t any surprise). He did give me some review assignments to get me started.

Ironically, the July/August ST-Log with my fireworks story finally turned up at newsstands that evening. It didn’t turn out too badly. Even my photos turned out. But that wasn’t enough to stop me from quitting the magazine and the Atari ST. With all the responsibilities I have right now, I can’t devote my time to a magazine that’s two months late. I was tired of the ST, and I wanted to make a change.

Surprisingly, Gerry Humphrey, one of the biggest [Atari] evangelists I know, agreed with me. However, I called him at a time when he lost his faith in the machine. He had just quit Hybrid Arts because he was dissatisfied with the company’s management. He also seemed to feel there was no future in the ST. He said, “For writing, the Amiga is a better choice for you.” Not only did he agree with my decision, he even offered to find buyers for my ST!

So the ST’s in the closet, and the Amiga’s on the desk. Right now, I’m clattering away on it and having a good old time. I thought the keyboard was too firm when I tried it at the dealer, but I’ve grown to like it. Too bad this is a one-piece machine, because I’d like to put the keyboard on my lap.

I’m not going to let the Amiga dominate my weekend. I’ve got grocery shopping, dishes, bills, and mail to do. I even have to slide over to my now lowly Commodore 128 to post messages on QLink. Soon, the Amiga will have to do its share of the chores too…

[My coworker] Deirdre asked me on Thursday, “What is the most important thing in your life?” I felt embarrassed to tell her it was computers. Somehow, I felt there had to be more to life than work. I did tell her about other things I did, such as walking and weight reduction class. I didn’t want to feel like I was too bound in my work.

Sometimes, I get so bound in the daily chores of writing, I lose sight of what I’m really doing it for. I want to write creative works like movies and books. I want my work to have a real impact on people—not just telling them what software to buy.

I hope my Amiga will help me with this task.