One month to go 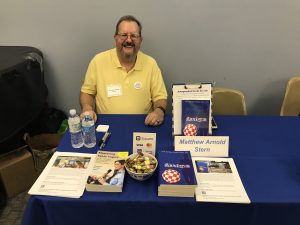 My novel Amiga will be released by Black Rose Writing on November 27, 2019. I have been describing my publishing journey in a series of posts. This is the eleventh of the series.

When I wrote about the ticking clock, the Amiga release date seemed far away. Now, it’s next month.

How does a writer deal with a looming book release date? The same way I deal with every other deadline I’ve faced–with calm and hustle.

It has been a busy time. I participated in Indie Author Day. I got my first video review and interview. I have another interview coming in a couple of weeks. I’m lining up some book signings. I’m also looking at going to a CSUN women’s volleyball game because the team is mentioned in the book, and they’re playing nearby at UCI.

There are so many more things I could do, but I have to balance my promotion time with work and family responsibilities. I’m also working on my weight per doctor’s orders. (Getting thinner is raising my energy level, which helps.)

So, where’s the publisher in all this? Don’t they do all the promotional work for you?

Even major publishers have limited time and budget to promote their authors. Unless you’re a celebrity or established bestselling author, publishers aren’t going to send you on a national book tour or late-night talk shows. (And I know some bestselling authors who still do their own promotion.) You also have to prove to your publisher that you’re willing to put yourself out there, build a platform, find markets for your book, and connect with readers. If you work, publishers will work with you.

The work doesn’t stop on release day. Building readership is an ongoing process. JK Rowling didn’t get her midnight bookstore launch parties until around Goblet of Fire. You make connections, get reviews, and let the word of mouth build. This is why you can’t let yourself get discouraged if you don’t hit the Amazon top 100 on the first day, the tenth day, or the fiftieth. As the saying goes, “It’s a marathon, not a sprint.”

In the meantime, you get started on your next book.

A month goes quickly–too quickly when you have lots of work to do. I still look to November 27 with anticipation and excitement. I hope you do too.