During NaNoWriMo, I’ll write an occasional post about the experience of writing my new novel, Amiga. (These won’t be too frequent because I’ll be busy writing the actual novel.) Since I have a little time before the madness starts, I’d like to describe why I chose the Commodore Amiga as the centerpiece of my book.My computer career started in the Commodore world. I got a job working with EnTech, a Commodore software developer. Shortly after I started working there, I got a Commodore 64. I then branched into computer magazine writing and upgraded to a Commodore 128. The Amiga seemed the next logical step, but the original one was too expensive. When the Amiga 500 came out in 1987, I had to get one. 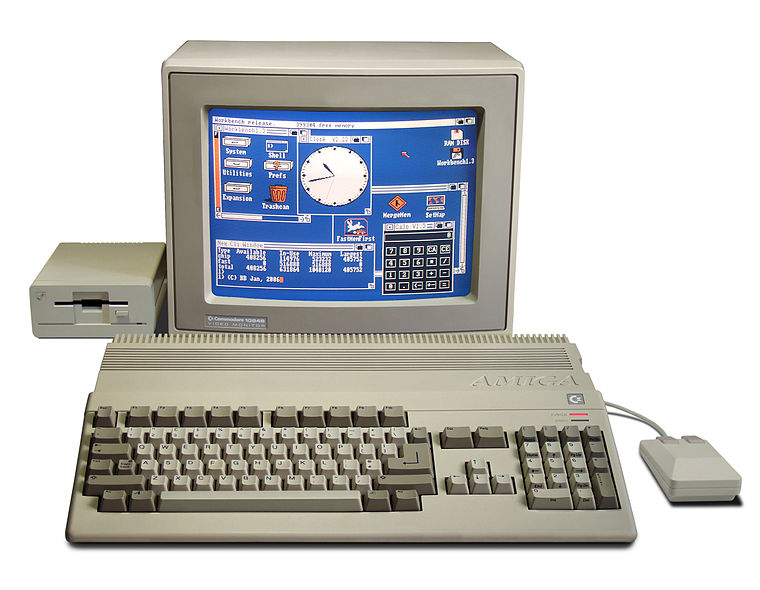 A windowed operating system with high-resolution color graphics is something we take for granted today. But coming from text-based computers with orange or green phosphor monitors, the Amiga seemed bright and exciting. It even stood out from the Macintosh, which had a small monochrome screen at the time. Unlike my Commodore 64 with its high, wrist-straining keyboard, the Amiga keyboard was comfortable. It had a standard PC layout, so it was easy to switch from typing on an AST Premium/286 all day at work to typing on my Amiga at home. The Amiga had a number of productivity programs, including WordPerfect, and a wide array of games. My wife and I even used my Amiga 500 to plan our wedding. It was the perfect combination of work and play.

The Amiga was also an underdog.

Commodore was one of many brands battling in the computer marketplace in the 1980s. Atari had its ST, Apple had its Macintosh and still popular Apple II family, but the IBM PC and compatibles dominated the industry. As Commodore fans, we were frustrated whenever the Amiga was ignored in the industry press. We cheered whenever the Amiga appeared in pop culture. We Amiga users had an emotional attachment to our device. We knew it was a superior computer that was losing out to more expensive and less capable devices. Commodore finally lost the fight as it went bankrupt in 1994.

It seems today that we don’t have the same emotional attachment with our devices as we did in the 1980s. Although we can talk about a Cult of Mac (of which I am a card-carrying member), we mostly see technology as a requirement of modern life. We must always carry our smartphones so that we can stay in touch, and there isn’t a job that doesn’t require the use of a computer.

But in the days of the Amiga, technology was truly magical. Each new device opened new possibilities, new things we can do, and new capabilities to explore and expand. Since I was in my twenties back then, the Amiga also represented the energy and excitement of youth. It was a time I defined myself and chose the life path I wanted to follow. This is the spirit I hope to capture in my novel Amiga.