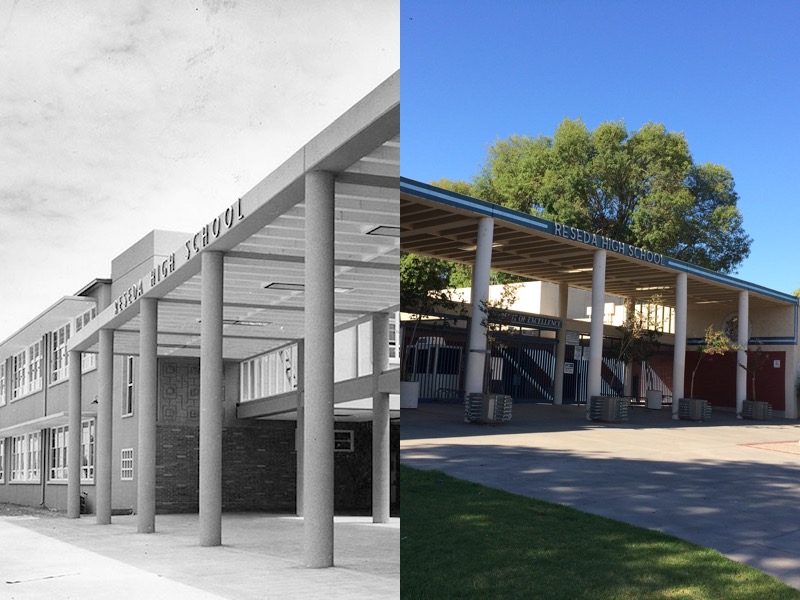 In previous installments, I cited scenes from movies about Reseda. Here’s another scene set in Reseda from a book I hope you’ll see soon:

Whenever I drove into the heart of Reseda, I felt like I was going into my past. Stores and restaurants had new names and bright coats of paint, but they still looked like the places where I used to go with my friends after school.

This is the feeling I have whenever I visit my hometown. For example, the front gate at Reseda High School is the same one I walked through 40 years ago. The letters had been replaced, and the solid gray  paint had been changed to navy and Columbia blue stripes, but the structure is the same.

In another book (which I also hope you’ll see soon), I described how Reseda’s efforts to revitalize the past would look to an outsider:

I thought about my office building back in Lake Forest. It was probably considered chic when it was built in the seventies, but it became dated and rundown to the point that some said it was hurting my practice. I couldn’t afford to move elsewhere, so I stuck it out in that building until they put on a new coat of paint and changed the carpet. It seemed that way in Reseda. People were too proud to move or unable to go elsewhere, so they made the most of what they had. They didn’t go on a pointless chase for the new, only to discover that it too someday will become worn-out and out-of-style.

Reseda is a remainder that has been fixed up and made new. And just as old buildings can be restored, so do people and their dreams.

“Free Fallin'” is the best-known song to mention our hometown. But the story behind the song is more evocative of Reseda than a “freeway running through the yard.”

“When my record company rejected Full Moon Fever,” Petty later recalled, I was hurt so bad. I was pretty far along in my career at that point. I’d never had anything rejected; I’d never really even had a comment. So when that happened, it was really just a board to the forehead. But then finally I picked myself up. I said, ‘I’m not buying this, there’s nothing wrong, I really like this record.’ And then I waited awhile, until the top regime at the record company changed. And I came back and I played them the same record, and they were overjoyed. It turned out to be a huge hit.”

Now, Reseda is also ready for its own comeback. The long-awaited refurbishing of its blighted core is moving forward, its long-shuttered movie theater will show movies again, and community groups are promoting Reseda as a creative and cultural center.

This is why Reseda has been an inspiration for my writing and my life. We take our blows, clean ourselves up, throw on a fresh coat of paint, and keep standing proud. It’s what you’d expect from a scrappy suburb surrounded by prosperous hillside communities that dealt with violence (and a couple of earthquakes). If it could endure, so can I.

The places we live in shape us deeply and unconsciously through their geography, culture, climate, and history. When you write, think about what your community is telling you. What stories does it want you to write?