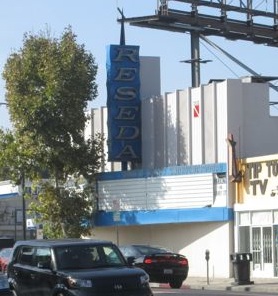 I had a wonderful time visiting my hometown of Reseda, California. I went there to do research on my novel, be interviewed by a writer creating a video history of the community, and meet with members of the Reseda Neighborhood Council.

As I went through my hometown, I realized I was seeing two Resedas: The Reseda I Grew Up In and The Reseda That Exists Today. When we look at a community and how to make it better, we can’t confuse the two.

The Reseda I Grew Up In no longer exists, if it ever existed at all. We tend to be selective in our memories, choosing what we want or need to remember and throwing out the rest. Romanticizing about the past can prevent us from seeing the present clearly.

For example, I’ve heard some people complain that Reseda was so much better before “those people” moved in. The truth is that “those people” were victims of discrimination. Racially restrictive covenants and discriminatory practices from banks and real estate agents prevented people of color from moving into our community until the courts overturned those practices in the 1970s. Ending these restrictions not only righted a wrong, it made our community stronger by welcoming hard-working, contributing members of all races and nationalities.

In The Reseda I Grew Up In, it was hard for kids to get help when they need it. When Mary Ann Henderson was murdered at our school in 1976, there were no grief counselors, no school-wide memorial services, no rape prevention assemblies, and no wristband sales to raise money for the family like there are today. All Reseda High School did to recognize her death was to put “In Memory of Mary Ann Henderson” at the bottom of a yearbook page. It seemed our school’s response to her murder was to pretend it didn’t happen.

Today, schools are more proactive about helping students in crisis and responding to tragedies. One example was how Reseda High School responded to the 1993 shooting on campus.

These problems don’t negate the great experiences I had in The Reseda I Grew Up In. I still cherish memories of playing in the street with the other kids in the neighborhood, climbing on the roof of my mom’s 1967 Chevrolet Impala to watch the fireworks from Reseda Park, and cheering at my high school football team. At the same time, I must also recognize that The Reseda I Grew Up In wasn’t perfect.

Accepting that it wasn’t perfect makes it easier to let go of things that don’t work anymore. Consider the Reseda Theater in the picture above. It has been vacant for 25 years. The longer it sits vacant, the more uninhabitable it becomes. It can certainly never be used as a movie theater again. With 4K video, movie theaters may all be obsolete anyway, just like the Licorice Pizza further down Sherman Way. The best thing that can be done with that theater is to tear it down and build something new. It’s better for the community to start fresh and entice new businesses than to cling on to an unsafe, unsightly landmark.

I also found how The Reseda I Grew Up In and The Reseda That Exists Today can come together. They came together at Joel Schaeffer Field on Friday night. The kids from The Reseda That Exists Today cheered just as enthusiastically for the Regents as we did in The Reseda I Grew Up In. The band and drill team were just as boisterous. They cheered more enthusiastically when our team was falling horribly behind. Nearly everyone stayed for the full game and cheered on the team, even when Reseda had no chance of winning.

Sure, things are different in The Reseda That Exists Today. The snack bar serves homemade soft tacos and tamales — and their delicious smell enticed me for most of the game. The stadium uses energy-saving halogen lights, and stands were completely redone with wheelchair ramps and metal benches. (No more splinters!) At the end of the game, they played the fight song instead of the Alma Mater. (Actually, I felt a bit cheated. I waited 35 years for a chance to sing that sentimental song again!) Still, the fun and excitement of a Friday night football game hadn’t changed.

In the end, I came to embrace both The Reseda I Grew Up In and The Reseda That Exists Today. I was able to see both as they are, flaws and all. I could appreciate how The Reseda I Grew Up In made me the person I am today, and see what the current generation of Resedans are doing with the homes and schools I left behind. I found myself rooting for The Reseda That Exists Today, hoping they can make something great with my hometown by building upon the foundation we created and turning it into something new and uniquely their own.

For me, the two Resedas became one Reseda. The Reseda That Exists Today inheriting The Reseda I Grew Up In, learning from its mistakes and righting its wrongs while keeping all that was wonderful and special about it.