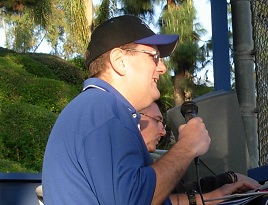 The following is a guest column I wrote for my brother Randy’s blog, The Heirloom.

After two years as a Little League president, I look at baseball from a different viewpoint.

When I see the grounds crew dragging the fields at Angel Stadium, I think about how many bags of Turface we had to order and making sure they arrived on fields day. Foul balls remind me of how much we had to pay for them and the fundraisers we ran to cover those costs. Being on a Little League board, we had to think about all the things that enable kids to play baseball. Picking team names and checking to see that we got the uniforms in the right sizes. Making sure we had trained umpires and that they showed up on time for games. Working with District officials to make sure we submitted the proper paperwork on time. I also spent a lot of time on weather.com to see if we had to reschedule games or events because of the rain. (Last year, our Opening Day was rained out twice.)

Then, there were the people problems that all youth sports are infamous for: screaming coaches, daddyball coaches, coaches who couldn’t be bothered.

Being a Little League president was probably hardest on my own son. It wasn’t a job he wanted me to do. He is at the age when anything a parent does embarrasses him, so it was tough on him having to see me give the Opening Day speech or hand out trophies, especially when his team wasn’t getting them. It was hard on me too watching him get passed up for All-Stars or having to watch some of the things he went through while knowing that it would be much worse if I took advantage of my position to help him.

Still, I don’t regret being a Little League president. I accepted the position when we desperately needed one, when the president and vice president at the time resigned, and no one else was willing to step up. The job had its good moments. My son had some great games and made a few friends. We won All-Star championships. One of our players won the Little League Good Sport of the Year award, and he and his family went to Williamsport, Pennsylvania.

And today, I don’t regret that my time as a Little League president is over. I finished out my term and provided a smooth transition to my successor. From what I’ve heard, the league is doing fine. We have about the same number of teams as last year. They’ve made some improvements, and they’re carrying out some programs that have worked well in the past. As the league has moved on, so have I. I have new responsibilities at work, I finished the first draft of a new novel, and I have busier family schedules with my son in middle school and my daughter in her senior year in high school.

There are times that I miss it. Times that I wish I could stand at home plate on Opening Day or at the microphone announcing ball games. I miss the satisfaction of watching kids out on the field, including my own son, and knowing that I helped make that experience happen for them. I can root for the Angels and Dodgers, but I can never root for any team as deeply as for our own kids.

Baseball is a sport of seasons – from the hope and anticipation of Opening Day to the solemnity of cleaning out the clubhouse when the season ends. The day comes when you must hang up the cleats for good. After two years as a Little League president, I’m more aware of the highs and lows, joys and frustrations of this sport. I can’t look at baseball the same way again.