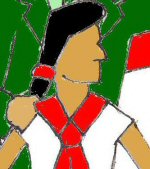 In an earlier post, I said I was restarting my Doria series. I’d like your feedback on an idea I have for the new book.

It is set in the present day. Doria has not only recovered from its revolution and transition to democracy, it has become a budding global superpower. Its president is Carla Guzmán, the hero of the first book. Doria finds itself in a diplomatic conflict with the United States because, well, let’s just say the President of the United States in this alternate timeline is the same one we have in real life.

Jennifer Kelly is a high school graduate from Kansas who won a scholarship to Doria’s prestigious Universidad Nacional and its robotics program. She knows little about Doria and cares less about politics. She finds herself an outsider in a different culture among people who seem smarter and more accomplished than she is. One is an Olympic gymnast who befriends her. Another is the daughter of a “hot headed” leftist legislator who instantly hates her. And there’s Fernando, a brilliant computer programmer for whom she develops a growing attraction — to the chagrin of Brandon, the boyfriend she left back home.

As the conflict with the United States intensifies, Jennifer must learn about Doria to make sense of her situation. She then finds herself the focus of a crisis when she stumbles onto a top-secret Dorian project and a dangerous global plot that could change the world.