So, you want to write a political novel… 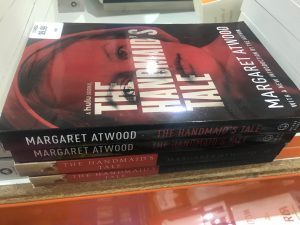 Everyone is concerned about politics these days, so you might be thinking about writing a political novel. After all, 1984 topped bestsellers lists this year, and The Handmaid’s Tale was made into a hit series on Hulu.

If you want to write a political novel, be careful. Agitprop makes for some horrible fiction.

Take Ayn Rand. The only thing I dislike more than her political and social views is her writing. When a classmate wouldn’t stop talking about her in high school, I read and promptly forgot Anthem. A few years ago, I tried slogging through Atlas Shrugged and gave up. Ponderous prose, unpleasant and verbose characters, and a heavy-handed and preachy plot.

It doesn’t get any better on the far left side of the dial. Of his novel The Jungle, Upton Sinclair said “I aimed for the public’s heart, and…hit it in the stomach.” Sinclair was clearly a lousy shot. Flat and forgettable characters and a tacked-on red-flag waving climax caused the story to fail harder than his 1934 gubernatorial campaign in California.

Why did 1984 and The Handmaid’s Tale succeed where Atlas Shrugged and The Jungle failed?

First, these books have well-developed and relatable characters. Winston Smith and Offred aren’t just stock oppressed people pulled from central casting. They struggle to preserve their humanity in an inhumane culture, and they yearn for real connection and intimacy in a society based on lies. Through their positions in the hierarchy, they can show us the big and small ways their dystopias oppress them without requiring a lot of exposition to explain them. Through Winston Smith and Offred, we experience repression. We feel the hopelessness that afflicts both the oppressed and oppressor. And this sensation of tyranny sticks with us longer than a thesis about it.

Second, good political fiction doesn’t confine itself to a single set of issues. George Orwell wrote 1984 as an attack on Stalinism, but it isn’t limited to that. Fears of “Big Brother” and a disgust of “doublespeak” aren’t restricted to a specific place and time, and they didn’t pass with the year 1984. In fact, we feel even closer now to 1984 with smartphones that track our every move and social media that rouses us to our version of a “Two Minutes Hate.” We will still be dreading the coming of 1984 even when it’s 2084.

Finally, good political fiction is about more than politics. The Handmaid’s Tale shows what happens to love in a society that doesn’t value it. When women are subservient to men and sex is an impersonal act only used to produce children, true love cannot exist. It is through this absence of love that we can discover what love truly is. We get a glimpse of it through Offred’s relationship with Nick and her yearning to get in touch with her daughter. We also see how the lack of true love wears on the Commander and Serena Joy. In the repressive and dehumanizing societies of 1984 and The Handmaid’s Tale, love is a subversive act.

In short, to write good political fiction, you must write good fiction. Include well-rounded and engaging characters, stories that transcend a specific place and time, and themes that go beyond the headlines to touch issues people care about deeply.

This leads me to some news about my next writing project. I’m revising Doria to make it the start of a new series. Its message of people uniting to save their country is something we need now. We have enough books about dystopias. We need a book about how dystopias can be overcome.