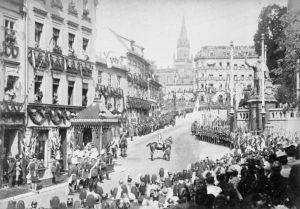 My novel Amiga will be published by Black Rose Writing on November 27, 2019. I will describe my publishing journey in a series of posts. This is the third of this series.

When I started writing Amiga in 2016, the presidential election was an event happening in the present. With everything that has happened in the past three years, my 2016 scenes seem as much in the past as those from 1985. My contemporary fiction has quickly become historical fiction. The reason may be the sense that we are on the cusp of a major historical change.

J.J. McCullough did a video about how different countries use major events to mark eras in time. Authors are also interested in shifts in era, especially with what the world was like before something cataclysmic happened. The year 1910 is popular, and it is especially cherished in Disney movies. Lady and the Tramp, Mary Poppins, The Aristocats, and Pollyanna all show an innocent world that had not yet been torn asunder by World War I. I’m seeing a lot of new novels set in early 1930s Europe where families (especially Jewish ones) go through their normal troubles unaware of the horror that will engulf them all.

As we look at the serious problems surrounding us — from climate change, right-wing populism, rising tensions and provocations between global powers, and the erosion of democratic institutions and human rights — are we in a pre-something era?

We always have a sense that an apocalypse may be nigh. Think of the times in the eighties when we believed a nuclear war between the U.S. and U.S.S.R was imminent. (In several cases, it almost happened.) But catastrophes can come from nowhere, upending peaceful, normal lives without warning.  Think Titanic, Chernobyl, 9/11, Katrina, and many other natural and human-made disasters.

We always live in a pre-something era. Something is always lurking around the corner that can change our lives and our world forever. Since we don’t know what this can be and when it would come, all we can do is write about the world as we see it. We capture a moment in history, whether it is in the distant or soon-to-be-distant past, to leave behind a testament of a world that will eventually be lost to history.

Amiga is a pre-something era novel. We will just have to wait to see what that something is.