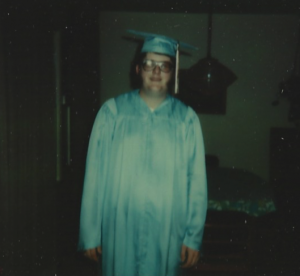 What if you could go back to your high school and give a graduation speech? It has been 40 years since I graduated from what is now called Reseda Charter High School. Here is what I would say to the Class of 2019 at Reseda and all other high schools.

To the Reseda Charter High School Class of 2019, this speech is a do-over.

I graduated from this high school 40 years ago. I was one of four valedictorians, because that’s how good we were. But I did not give the valedictory speech. There was a contest among all the seniors in AP English classes, and my speech wasn’t picked. They had a good reason. My speech stunk.

Some would say that right now is the best years of my life, despite everything happening in the news. I’m at the top of my career. I’ve published several books and have a new novel coming out in November. I’ve traveled to Europe and Hawai’i. I’ve been married to my wife for nearly 30 years. I’ve watched my children grow up and make lives of their own. I became a grandfather, something my parents didn’t live long enough to see. In these respects, I consider myself blessed.

But let me tell you about other best years of my life.

There were the years immediately after I graduated from Reseda. Two months after graduation, my mother had a major stroke that left her paralyzed for the rest of her life. A summer job I got at the Carl’s Jr. on Sherman Way became a primary source of income. I had to balance college and taking care of my mother and brother. Those were dark and difficult times.

Why would I include them in the best years of my life? It’s because it was when I began to define myself. I had to grow up quickly and got crash courses in managing finances, running a household, and dealing with government agencies for assistance. They were times of experimentation as I had to figure out how to make a living doing what I love. I had all sorts of experiences and dared myself to try new things.

As difficult as they were, the years after high school were among the best years of my life.

And then there was 2003. For those starting junior year, 2003 was a good year for them because that was when they were born. For me, 2003 was a year when everything seemed to go wrong. It started with us learning that employees at a dealership where we bought a car stole our identity and used it to buy luxury items in Las Vegas. My wife’s brother’s wedding almost turned into a brawl between between my in-laws. I was forced out of my job by a difficult manager, and I was out of work for two months. Those were painful and uncertain times.

So, why would I include them in the best years of my life? In those two months, I was able to spend time with my family. We celebrated our daughter’s tenth birthday and started our son in kindergarten. We adopted a dog from a shelter. And that year, I found the job where I’ve worked ever since. As difficult as it was, 2003 was among the best years of my life.

Any time can be the best years of your life, no matter how difficult it is. What defines us aren’t our successes, but our challenges. Our moments of greatest satisfaction aren’t the ones of comfort and ease. They come from the pride of overcoming obstacles, facing dangers, and becoming stronger in the process. The best years of our lives are those when we become more than we thought we can be.

You’ve already faced challenges to get here, and you will face many more in the years to come. Face them with courage, determination, and openness. See the opportunities in the difficulties and look for the lessons in the heartbreaks. By doing this, you can make those times the best years of your life.