Star Wars: When villains are more likable than the heroes 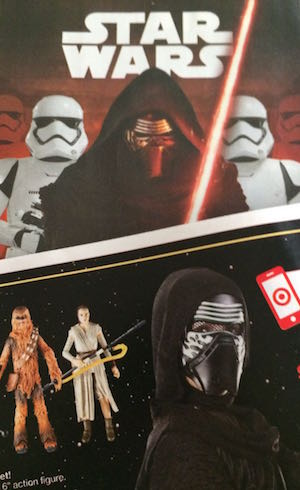 (Spoilers ahead.) The first set of Star Wars: The Force Awakens toys hit the shelves in the United States, and I already see a problem. The villains seem more likable than the heroes. Have you seen the new Stormtrooper action figures and Rylo Ken with his dual exhaust lightsaber? With the exception of that beach ball BB-8 droid, all of the cool toys are those of the villains. While having fascinating and attractive villains can add to a story, the danger is when the villains overshadow the heroes. And Disney and Lucasfilm may be making the problem worse by selling toys of the characters before the movie comes out.

To see why this is a problem, let’s look at the original Star Wars movie from 1977.

Star Wars (and I’m not calling it Star Wars, Episode IV: A New Hope here, OK?) made it clear who the villains and heroes were. Darth Vader and his minions were unquestionably evil. They committed murder, torture, and xenocide. Darth Vader would even strangle and kill his own officers if they questioned him. The Empire was brutal and merciless.

Fortunately, the Empire was challenged by heroes who were unquestionably good. They reflected the qualities we would want for ourselves: nobility, courage, self-sacrifice, faith, and a bit of swagger. We could root for them as much as we could root against the villains. As compelling a character as Darth Vader was, Luke Skywalker, Obi-Wan Kenobi, Han Solo, and Princess Leia proved even more engaging. Who wouldn’t want to hop in the Millennium Falcon and blast into hyperspace with them?

Qualities like courage and charm don’t readily translate into four-inch plastic figures. Fortunately in 1977, we had the experience of the Star Wars movie before the Star Wars toys. We knew who those characters were and what they stood for by time we saw them on toy store shelves. As a result, everyone wanted the hero toys like X-Wing fighters and R2-D2. No one wanted a Darth Vader action figure at the time. He was too scary. I wonder how audiences would have responded to the story if the toys came out first. Would people still have considered Darth Vader so evil when his toys look so good?

Star Wars shows the challenge of balancing heroes and villains. We want heroes that reflect the values we want audiences to root for, but we can’t make them so good that they become boring. At the same time, we want villains who are strong enough to challenge the heroes, but we can’t make them so strong and compelling that they overshadow the heroes. The original Star Wars trilogy did this well for the most part. The prequels, not so much. And the new Star Wars movie? Bringing back the original heroes will help, and perhaps the new ones will prove to be as exciting. However, the toys are giving the audience a first impression of Star Wars: The Force Awakens that tips the scales in the villains’ favor.