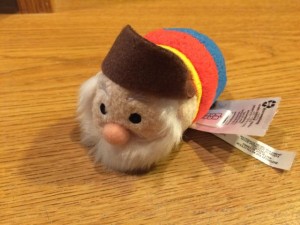 My wife bought one of those Disney Tsum Tsum plush toys at the Disney Store. These are Disney characters compressed into a pill shape for maximum cuteness. The Prospector from Toy Story 2 caught her eye. When she bought it, the sales clerk said, “You know, he’s the villain.” My wife replied, “I know, but this toy looks so cute.”

This got me thinking: Why don’t we have more cute villains, or at least more good looking ones?

We have a stereotype about villains and heroes: Good people look good, and bad people look bad. There are a few exceptions like Frozen and Shrek, but most fiction follows that trope closely. Even when a villain is considered good looking, something is always shown as being slightly off. Patrick Bateman in American Psycho is handsome and polished, but he’s too handsome and polished. The Queen in Snow White is beautiful, but not the most beautiful. When she turns into an ugly old crone, that’s when she becomes her most evil.

The news depicts real-world good guys and bad guys the same way. When someone is accused of a crime, we see that person’s mug shot. Usually, the suspect has a scowl on his or her face and hair and clothing that have been disheveled after the altercation with the police. You won’t see the suspect in photos from his family or high school yearbook. Those happy photos are reserved for the suspect’s victims. Those photos show the victim smiling with arms around family members or friends. Victims are usually shown wearing shorts, especially if they’re female, so they look active and vivacious. This depiction of suspects and victims not only supports a stereotype, it prejudices prospective jurors. Suspects are convicted through “trial by media” before they get their day in court.

Like other stereotypes, “good people look good, and bad people look bad” isn’t completely true. Some of the worst villains in history were good-looking people. They had to look good so they can sway others to join in their crimes. Before he carved a swastika in his forehead, Charles Manson was considered handsome enough for a hippie of the 1960s to attract women to his cult. Even at age 80, he is still considered handsome by his fiancée. The people you don’t suspect are the ones who can entrap and hurt you. The ones you trust because they dress nicely and are well-groomed. The ones who are too old, too young, or too attractive to be a threat. “Good people look good, and bad people look bad” isn’t just stereotypical, it’s dangerous.

This is why fiction needs more cute and good-looking villains. These type of villains provide excellent plot twists, but they also can educate readers that you can’t always trust people based on appearances. You have to look inside a person to see his or her true nature and intentions. Conversely, we also need more heroes who aren’t “aesthetically pleasing.” These also caution readers not to making judgements based on appearance and see people as they really are.

Good fiction shows us that the real heroes and villains are not those we can judge by appearance. Sometimes, the most attractive people are the most dangerous.