I know there are more pressing issues right now. But I’m excited to announce that the draft of my new novel Christina’s Portrait is complete and ready for beta readers. It’s a project I started in NaNoWriMo 2020, but it’s a story that has taken me 46 years to write. Here’s what the story is (and isn’t) about.

What Christina’s Portrait is about 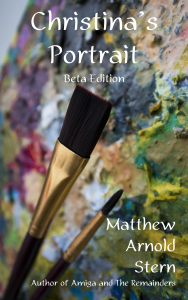 A high school student goes in search of a ghost. She uncovers a mystery, a story of heartbreak, and someone who can help her deal with her own loss.

Benicia is a budding videographer. When she and her friend Maya are caught trying to capture a video of a ghost that supposedly haunts her high school, her principal gives her an assignment. She must uncover the truth about Christina Anderson, the girl who was tragically killed 44 years earlier. Their only clue is a portrait of her that appeared in the yearbook. It’s a painting created by an unknown artist.

Benicia and Maya interview Christina’s classmates, who are still grieving for their lost friend decades later. But the one person who knew Christina best is Noreen Davis. She was the last person to see Christina alive. But she refuses to talk—and for deeply personal reasons.

As Benicia uncovers the truth about Christina and her mysterious portrait, she must come to terms with her mother’s death from COVID. She finds a budding romance with Agustín, a fellow videographer who is dealing with a tragedy of his own. And when Benicia and her friends finally come face-to-face with Noreen, they learn about a painful truth that has been buried for over 40 years.

The present will face the past in Christina’s Portrait, a novel that shows the healing power of storytelling.

What it’s not about

If you follow my site, you’ll see a number of posts about Mary Ann Henderson. She was my classmate who was killed at our school in 1976 and whose ghost is rumored to haunt the school. Christina’s Portrait is not about her.

As I was working on this novel during NaNoWriMo, I realized I needed to do a fictionalized version of this story. To do it right, I had to take Christina Anderson further and further away from Mary Ann Henderson. Not only did I have to change key dates and details, I had to make sure Christina’s appearance and personality are different. For example, Mary Ann was renowned as a budding artist. Christina is not, as described in this scene:

“I took an art class in junior high, but I wasn’t very good at it.”

I couldn’t imagine Christina not being good at anything.

You can think of Christina’s Portrait like Inherit the Wind. I use a fictionalized version to explore themes and cover issues that weren’t a part of the actual event. And Christina’s Portrait covers many issues past and present, including the San Fernando Valley’s difficult path to racial integration, the COVID pandemic, gun violence, the struggles of LGBTQ+ youth, and the need for communities (and our country as a whole) to face the difficult parts of our history.

I hope by telling this fictional story that it opens the door for someone to tell the actual story about Mary Ann Henderson.

I will be reaching out to beta readers soon. Because this novel includes a number of communities and touches several sensitive subjects, honest feedback is important. I’ll keep you posted on my progress. Thank you for your support, and I look forward to sharing Christina’s Portrait with readers soon.