A time to act 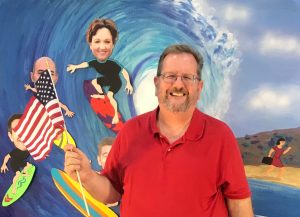 Thoughtful blog posts and snarky tweets can only go so far. If you want change, you have to get out from behind the keyboard, put on your walking shoes, and hit the streets.

It has been 36 years since I’ve been involved in any type of political event besides voting. But I went to a debate of Democratic candidates in May. This week, I’m attending a meet-and-greet with our Democratic candidate for Congress Katie Porter and will march against the forced separation of migrant children from their parents.

Why am I stepping out and getting involved with politics now? Because the situation is too serious to sit back and do nothing.

I’m getting politically active today for the same reasons I did when I was a broke college student in the 1980s. Things are happening in Washington that have a direct effect on the welfare, safety, and future of my family and my country. Even if the economy looks good now and political rumblings don’t affect me personally, I know conditions can turn ugly fast.

Like they did for the families in Parkland, Florida who had comfortable, contented lives until they didn’t. They were thrust into a situation where they had no other choice but to get politically active. You can’t expect people to sit politely and watch their children die.

Speaking of politeness, I still believe in civility. A kind word can do more than a thousand insults, and those who ignore a shout will strain to hear a whisper. But when people won’t let you whisper, you have to scream. Protest is, by definition, uncivil — especially because the powers that be define civility as “shut up and do what you’re told.” When your family and the future of the country is at stake, you don’t have the luxury of being nice.

Although we can express our views through writing and social media, we have to show up and make our presence known. A single blog post can be ignored, but thousands of people marching cannot. People can scroll past a tweet, but they can’t ignore millions filling the National Mall. Showing up and gathering together is how we build community, support each other, and amplify our voices. When forces seek to divide and isolate us, we must stand together.

I look forward to the time when my family and democracy are safe and secure, and I can spend my free time playing with my granddaughter and catching up on TV with my wife. But as long as our freedom and our future is in peril, I must take a stand.