In my latest author interview, I talked with Joseph Lewis about crime and mystery writing, his love for the Green Bay Packers and all Milwaukee sports, starting a writing career later in life, and his latest Black Rose Writing novel, Blaze In, Blaze Out.

I saw on your Facebook page that you’re a Green Bay Packers fan. How did you get into rooting for the Packers? What is your favorite memory of the Packers?

I was born and raised in Wisconsin, so rooting for the Packers (and Brewers and Bucks) came naturally. There are so many fond memories. One Christmas, Kim and I bought tickets to a Vikings game at Lambeau Field in Green Bay for us, for my daughter and her now husband, and my other daughter and her boyfriend. It was the coldest game I’ve ever been to, and with Rodgers not playing because of an injury, the Packers lost. But what made the game and evening special was that Kim and I shared that experience with Hannah and Alex, and Emily and Q.

Let’s talk about your background. You’re a retired teacher and basketball coach. How do your experiences influence your writing?

You can find me all over the pages of my books. The first four books were a direct result of my work as a counselor and my work with the Wetterling Foundation for missing and sexually exploited children. I worked as an adjunct educator speaking to parent groups, school assemblies, teacher groups, and various organizations on how to keep kids safe and what to look for. Because Kim and I had our own children, instead of picturing Johnny Gosch, Elizabeth Smart, or Jacob Wetterling, I began picturing my own kids, Wil and Hannah. I felt I had to step away, but I always felt the need to give back and tell the story of sexually abused and exploited kids and missing children. The books: Taking Lives, Stolen Lives, Shattered Lives, and Splintered Lives directly resulted from my work with the foundation, my work as a counselor listening to kids and their parents, and the hours of research I put in to make myself smarter and a better counselor and speaker.

My latter four books: Caught in a Web, Spiral Into Darkness, Betrayed, and my newest, Blaze In, Blaze Out, result from my working with kids for 46 years and counting as a teacher, coach, counselor, and administrator. I listened to kids, watched kids. As much as anything or anyone, they taught me, and as a result, the stories flowed.

You’re primarily a crime/mystery writer. What attracts you to this genre?

This genre is my go-to for reading, TV shows, and movies. I get enjoyment from it. I try to “crack the case” and “figure it out” before the characters do. A really well-written book, TV show, or movie will keep you guessing until the very end. That is what I do in my books.

One exception was in my book Spiral Into Darkness, about a serial killer without an agenda or motive—or so it seems. It asks the question: is a serial killer born or is there an event that causes one to become a serial killer? In that book, the reader will find out who the killer is around page 200, but the reason and motive won’t be figured out until the end. I like that book a great deal.

You also talk about other elements you use in your stories, mainly family and individual drama. How do these elements add to the crime and mystery aspects of the story?

In my writing, much like life, there is a story that collides with a story. My characters are real to me, and because of that, they are real to my readers. They see them, hear them, picture them, and root for them. So do I. Because of that, the drama that takes place with my characters weaves in and out of the mystery, the crime. I believe that makes for a better story.

You say, “If I had to choose my favorite part of writing, I would say the beginning. I believe it is because that is when the story idea comes bursting to the forefront, and I simply have to get it down on paper.” What makes a good beginning of a story? And how to writers move from a good beginning to a strong middle and ending?

I wrote about this on my author website at www.jrlewisauthor.blog with the title, First Lines and First Paragraphs. It is always exciting to begin a new story. The page is fresh. Your fingers are ready to strike the keys. That is exciting for me. Writing the ending, Last Lines and Last Paragraphs at www.jrlewisauthor.blogis sad to me. In a well-written story, you don’t want it to end. However, in a well-written story, the reader knows another adventure will begin, so it really isn’t too sad. What is hard for me is what I call the “murky middle”: those chapters between the beginning and the end. To solve that, I view and write each of those chapters as if they are a story of and by itself.

Kind of sick, right? There are many writers who dread it. But I look at it as polishing a gem, refining it to make the “edges” smooth to the touch (read).

My process differs from others in that before I sit down and write the next chapter (I try to write a chapter a night), I reread the previous night’s work. That serves two purposes for me: 1. It gives me an opportunity for me to do small edits, fix wording and passages, correct punctuation, etc.; 2. It puts me in the mood, frame of mind and setting for the chapter I’m about to write. I find this process helps in the overall editing that takes place after the first, second, and sometimes the third draft.

Let’s talk about your books. On your site, you tell a fascinating story about how your Lives series was created and later picked up by Black Rose Writing. What inspired the series?

I believe I answered this in a different question, but those four books were a result of my work as a counselor and adjunct educator for the Wetterling Foundation for Stranger Abducted and Sexually Exploited Children. When I wrote those books, I used many stories from that work, and from what was shared with me in my counselor’s office. Of course, I’m careful not to betray the trust or confidentiality of those kids and their parents. I embellished, changed locations and settings, changed names and ages. All important to convey the tragedy of missing and exploited kids. 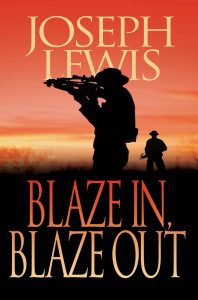 Your latest book, Blaze In, Blaze Out came out in January 2022. Tell us about the book.

The book synopsis tells the story:

Working with a joint multi-law enforcement task force, Detective Pat O’Connor infiltrated a Ukrainian crime family headed by Dmitry Andruko. O’Connor and his control, Detective Paul Eiselmann, were the linchpins in the guilty verdict. The two detectives thought it was over, but it was only the beginning.

Eiselmann planned for a quiet weekend with his family at home. O’Connor planned on heading to Northern Wisconsin for a fishing trip with another cop, Detective Jamie Graff, and four teenage adopted brothers.

The quiet weekend and the short vacation turn into a deadly nightmare as O’Connor’s and Eiselmann’s lives and the lives of the four boys are in peril.

What was the inspiration for the characters in Blaze In, Blaze Out?

I do what they do: I take my characters and move them forward into a new adventure, a new story. Blaze differs from my other books in that the main characters are three cops: Pat O’Connor, Paul Eiselmann, and Jamie Graff. In my other books, the main characters are a mismatched family of adopted adolescent boys, and the cops are in the background. The boys are in Blaze, but are more in the background, while the cops are in the forefront. It was a nice change of pace and my readers seem satisfied with it. Me, too, if truth be told.

You’ve entered in several contests, and your books have done very well. Your novel Betrayed was a runner-up in the Maxy Award and won a Literary Titan Silver Book Award. How has entering your books in contests helped you as a writer?

Contests and awards give validation to me as a writer. They tell me I’m doing okay, I’m hitting home runs. More importantly, it gives the reader confidence that what they might purchase is “worth it.”

The contests, much like the reviews on my books, help me polish and grow as a writer. I try not to dwell too much on the reviews—good or bad. My belief is that once the book is written and published, the book ceases to be mine. The book belongs to the reader. As a result, I have to understand that not all readers will love the book, just like not all readers will hate the book. The reader speaks to each reader in his or her own way. That’s important for any writer to remember.

What advice would you give writers who want to enter in contests?

Don’t take the results to heart. Learn from them, grow, and move on. The same can be said with reviews and ratings.

You said you got into writing later in life. What advice would you give writers who also want to start writing in their later years?

If there is a story in you, it will find its way out of you. It doesn’t matter how old one is. It doesn’t matter how young one is. Last year, I sat on a panel that included a young teenager who had her book published. I’m friends with other writers who are older than I am. What is important is that one writes. One reads. One disciplines oneself to sit your butt down in a chair in front of a computer or laptop and get the story out. Quit putting it off. Write!

How can people find out more about you? Where can they find you online and on social media?