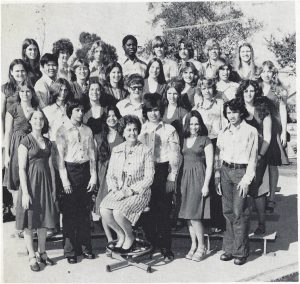 This is the first installment of a series, Lessons from Musicals.

Forty years ago, I performed in my first high school musical. Actually, we did excerpts from several musicals including Oliver and Plain and Fancy. I went from Mr. Bumble to Papa Yoder and experienced stage makeup for the first time (and the massive amounts of cold cream to take that stuff off).

But my experience with musicals started long before I took the stage at Reseda High School in 1977.

My parents collected soundtrack albums. As I listened to the music, I’d follow the story in the liner notes and imagined how it played out on stage. My parents didn’t take me to musicals because tickets were expensive and hard-to-get even back then. (And little kids don’t do well in theater seats for two hours.) Still, I developed a connection between music and storytelling that I use today.

Writing wasn’t the only thing I learned from musicals. My time on stage gave me my first experiences with public speaking. From the stories in musicals, I gained insights into life and becoming an adult.

For the fortieth anniversary of my first stage musical, I’ll tell you about three musicals I performed in and the lessons I learned from them (plus a bonus installment). Note that there will be spoilers. Raise the curtain.

Next: The heartbreak behind camp.