Dames at Sea: The heartbreak behind camp 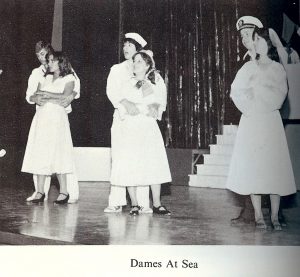 This is the second installment of a series, Lessons from Musicals.

Of my performances in high school, my role as Hennesey in Dames at Sea was the most memorable. Even though I was sheltered and naïve in high school, I sensed there was something somewhat off about Dames. A musical we performed in the 1970s that was written in the 1960s to parody musicals from the 1930s? Although it centered around three heterosexual romances, I could sense there was a gay subtext. Perhaps it was lyrics like these (sung about a guy named Dick): “…my gentle he-man/The man for me man, my first class sea man…” Or maybe it was that Village People song that came out the following year. Dames at Sea was certainly campy.

Therein lies the heartbreak in Dames at Sea.

I recently learned that Dames at Sea actually did have a gay backstory. It premiered at a gay theater, Caffe Cino in Greenwich Village. Run by Joe Cino, it provided a gathering place and cultural hub for the LGBT community in the 1960s. Cino urged gay male writers to be open, something they couldn’t do elsewhere. “It’s magic time,” he said, “Do your own thing, and do what you have to do.”

Part of being a gay artist when it was mostly illegal to be gay was camp. Camp played upon the stereotypes imposed on gay men. It became a way for gay artists to mock and rebel against the restrictions placed on them by society while giving a reassuring wink to the gays in the audience.

Even though we performed Dames nearly a decade after Stonewall, gays still needed that wink – especially the gays who were on stage with me.

I didn’t know they were gay back then. I also didn’t know about my brother until years later. They couldn’t let me know because homophobia was still strong in the 1970s. We performed Dames at Sea the year the Briggs Initiative was on the ballot, Harvey Milk was assassinated, and Billy Crystal got his break playing a controversial gay character in Soap. The only place gays could find safety was in the closet, especially when Reseda was still a conservative, middle-class suburb.

My brother finally made it out of the closet, but my friends didn’t. They were taken in the AIDS epidemic in the 1980s. I would have like to have known them when they were free to be themselves and live the life they were meant to live. The world is lesser without them.

Today, LGBT artists no longer need to depend on camp. They can express themselves freely and openly, as Joe Cino urged them 50 years ago. But my friends in high school never got the chance. This is why I look at Dames at Sea with a sense of loss.

Next: Talent really is a thing.