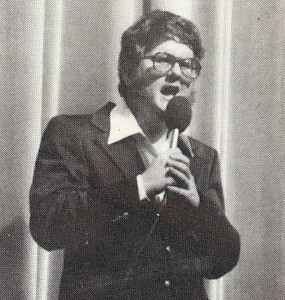 When I sang in the Reseda High School Vocal Ensemble in the late 1970s, I got to perform with some very talented people. Some of them, like Perry Lambert, Jeff Marsh, and Catherine Fries Vaughn, continue to perform and create music professionally. As for me, my singing is limited to showers and whenever I want to mortify the kids.

However, my musical theater experience shapes my writing. Even if the work doesn’t include songs in them, I find that music helps me shape my story and set the mood. Here’s why and how I use music. (Spoilers ahead.)

Critics make fun of how characters in musicals seem to break into song for no apparent reason. When a musical is done right, there is a reason. Well-written and well-placed songs reveal character and show how that person changes during the story. Pippin provides some great examples. Pippin’s first number, the bold and impetuous “Corner of the Sky,” brims with his youthful zeal, determination, and inexperience. His final number, “Magic Shows and Miracles,” shows how he changed and grew from what happens to him in the play. His songs show his character arc.

Sure, it’s not realistic to show people bursting into song to express their feelings at any given moment. But fiction isn’t realistic. You have to leave out mundane details because they don’t further the story or are uninteresting to watch. Some mundane details are important, and music solves the problem of showing them in an entertaining way.

Disney did this well in a couple of their nineties era animated features. “Little Town” in Beauty and the Beast reveals the personality of the main character and sets up what will happen in the story. When we think of “Hakuna Matata” from The Lion King, we mostly associate it with the catchy melody and Pumbaa’s flatulence. The important part of the song happens in the second half as it shows Simba transitioning from childhood to adulthood and turning his back on his responsibilities (and a lion’s normal diet). This portion of the song also compresses three or four years of a lion’s life into eight seconds. These songs provide important details and cover long periods of time while furthering the narrative.

People who turn their noses up at musicals enjoy films like Jaws, Star Wars, and A Fistful of Dollars. I’d contend that they are just as much musicals as Pippin. Although no one breaks out into song, music is still a key part of the storytelling. It sets the mood and our anticipation of what will happen next. It lets us know that danger is coming in Jaws, and adventure is nigh in Star Wars. In writing the music for A Fistful of Dollars, Ennio Morricone said:

Leone’s films were made like that because he wanted the music to be an important part of it, and he often kept the scenes longer simply because he didn’t want the music to end. That’s why the films are so slow – because of the music.

It shows in all of the films in the series, especially the unforgettable theme for The Good, the Bad and The Ugly. The music alone tells you everything you need to know about the story.

How I Use Music

Music appears in three of my creative works. In a play I wrote for my daughter’s middle school drama class, “Summer Job,” a babysitter is tormented by the theme of her charges favorite show, “Happy Rocker Bugs.” I used it to set a humorous mood and to drive the narrative. It’s a way of showing the frustration of a babysitter by using a situation all of us parents who had kids during the VHS era can relate to.

In Offline, “Let There Be Peace on Earth” plays at an important juncture in the story. After a frustrating first week at her new job, the protagonist Lucy Merriweather joins in the singing of this hymn. It helps her reconsider her actions and become more determined to solve her problems. She replays the hymn in her mind when she is about to confront her boss. This song shows Lucy’s character as a person of faith and determination as well as drives the narrative. (Of course, you need to get the permission of the songwriters and publisher and pay any royalties before you include a song in your work.)

In Doria, music figures into a scene where Carla Guzmán performs a floor exercise during a gymnastics meet in Chile. I don’t use a specific song, but I use music to show Carla’s personality as an athlete and artist and how she tries to deal with the stresses surrounding her:

The first notes of the piano concerto started. Carla sprung forward. She vaulted into a series of handsprings and somersaults. She touched down in the opposite corner. Polite applause broke through the haze of the lights…

Carla didn’t hear the whispers or the applause. All she heard was the music. She let the notes flow through her, extending her arms and legs to the melody. A crescendo drove her to her next vaulting run…

Everything melted away from Carla – the arena, the crowds, Chile. Her entire world was a 12 by 12 meter square where her only companion was the music that filled her body.

Here, music not only reveals character and sets the mood, it also drives the narrative. It shows the emotions of a gymnastic competition, while skipping the mundane details of the event.