No NFL in LA 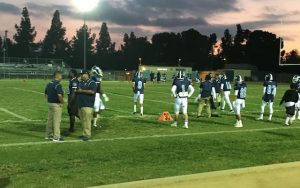 It has been an exciting weekend of football in the Los Angeles area. We were treated to a Thanksgiving full of NFL games on TV. We had the USC-UCLA game (which the Bruins lost, unfortunately). High school football playoffs are nearing their championships.

And we may be close to having one or more NFL teams back in Los Angeles. Three teams that used to play here — the Chargers, Raiders, and Rams — have expressed interest and are working on various proposals. The NFL seems determined to make this happen.

And as a long-time Los Angeles-area football fan, I’d like to say, “No, thank you.”

We all know that NFL teams don’t want to move to LA “to grow roots in a community with a proud football tradition” or “connect with the great fans in the entertainment capital of the world.” They want to extort more money out of the cities they’re already in. The Chargers, Raiders, and Rams have all expressed dissatisfaction of their current stadium deals. (In the case of the Rams, their stadium is only 20 years old and was built specifically to bring the team to St. Louis.) So, what will happen when a team gets dissatisfied with its stadium deal in LA after 20 years or tries to cut out of their lease even sooner than that?

Professional sports teams (and the politicians who want to spend tax dollars to bring them to their community) claim that they generate tax revenue and create jobs. Economists disagree. In Marketplace.org, Ben Bergman quoted Michael Leeds, a sports economist at Temple University, “If you ever had a consensus in economics, this would be it…There is no impact.” Roger Noll and Andrew Zimbalist, authors of Sports, Jobs, and Taxes: The Economic Impact of Sports Teams and Stadiums, said:

A new sports facility has an extremely small (perhaps even negative) effect on overall economic activity and employment. No recent facility appears to have earned anything approaching a reasonable return on investment. No recent facility has been self-financing in terms of its impact on net tax revenues. Regardless of whether the unit of analysis is a local neighborhood, a city, or an entire metropolitan area, the economic benefits of sports facilities are de minimus.

In fact, having a team leave can be good for a community. Victor Matheson, a sports economist at College of the Holy Cross said, “Sporting events can cause significant crowds and congestion that can cause people to stop going to other events in the area.” Citing a a 2003 analysis on Staples Center commissioned by the Los Angeles City Controller, Matheson said, “Economic activity in Inglewood actually increased when the Lakers left town.”

The Los Angeles area has done just fine without an NFL team for 20 years. NFL fans here have picked some other team to root for. Raiders fans don the silver and black whether their team plays here or in Oakland. Target sells plenty of San Diego Chargers t-shirts, caps, and plush toys, and they would probably sell about as many if they were the Los Angeles Chargers. We’d rather play fantasy football or watch NFL games at a sports bar. We don’t care where a team plays as long as we have a good time watching.

And when we want the excitement and fun of watching football in person, we know where to go.

We don’t need to look any further than the local high school. We get to see young people play with passion and a love for the sport that some of the pros seem to have lost. You certainly can’t beat the price of a high school football game. Recently, I drove 70 miles to attend Reseda High School’s homecoming game. Figuring in the price of gas and admission, it still cost me less than hot dogs for a family of four at a typical NFL football stadium. I also got much better seats. Try getting a front-row seat at the 30 yard line at an NFL game for $7. That doesn’t even cover the ticket handling fee.

By going high school games, we support programs that help young people. Sports teach students valuable lessons that help them through life. Reseda High School’s late football coach Joel Schaeffer not only lead the Regents to city championships, he taught his players to be better people. His son Scott said, “Coaching football for my father was more than Xs and Os. It was a conduit to reach young men who didn’t have a father figure because he lost his at a young age.” Reseda’s current head varsity football coach Alonso Arreola added:

One of the most important things I learned from coach was that I needed to know how important it was to help these kids become young men. And that we had to find ways to use football as a resource to accomplish that goal.

Sorry, Roger. We don’t need the NFL in LA. We have all the football we want already.