What if you couldn’t vote? 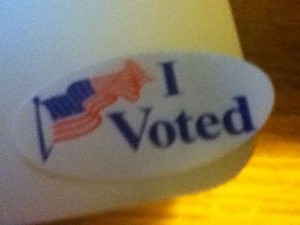 A recent Gallup poll estimates that voter turnout will be down for Tuesday’s US elections. But voter turnout hasn’t topped 60% for a presidential election since Nixon and Humphrey went at it in 1968. We Americans do take voting for granted. We consider it as pleasant a duty as serving on a jury or getting an oil change.

But what if we couldn’t vote? Many people around the world can’t. What if our right to vote was taken away?

It’s a subject I explored in my novel Doria. In my story, citizens lost their right to vote when their country’s military overthrew the civilian government in 1876. Actually, people didn’t have much of a right to vote before then. Women couldn’t vote, and the nation’s minorities encountered discriminatory laws that kept them from voting. Those who could vote didn’t have much to vote for. Corrupt politicians were more concerned with lining their pocket books than helping their country.

So, losing the right to vote didn’t bother the good citizens of Doria too much. As long as the military kept the streets safe and the trains running, who cared if they were elected or not?

Except that over time, people got fed up with not having a say in their government. Women and minorities, who didn’t have much of a say to begin with, faced even more discrimination and abuse. Labor unions couldn’t press employers for better working conditions, and consumers couldn’t press companies to produce safer products.

The lack of accountability made the military rulers even more corrupt and decadent than the civilian ones. When a dictator died, his potential successors would try to outmaneuver each other to take his place. Junior officers and troops were forced to align themselves with one potential leader or the other. Some of these political transitions led to violence, but all of them dragged the country into instability until a new leader emerged.

Finally, the citizens of Doria became so fed up that they revolted. The nation erupted into a violent and destructive civil war and found itself a flash point in the Cold War.

Doria is a fictional country, but the situations are real. We see it today in Syria and Libya, as well as many other dictatorships throughout history.

Therefore, we Americans should be grateful that we have the right to vote. That right has produced a stable and civil society. Our government runs on laws, not force. The liberties of all citizens are protected. Businesses can flourish because they operate in a fair and stable society. Citizens have a way to express dissatisfaction without it exploding into violence.

The way we can express our gratitude is by exercising this right. As citizens of a democracy, we’ve been given an opportunity that many yearn to have. Don’t waste it. Vote.