What I miss about the Valley 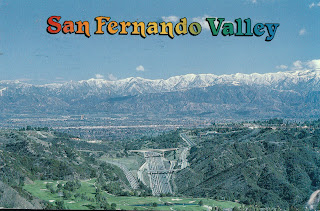 Streets That Are Easy to Understand

You can easily find your way in the Valley. Roads run north-south and east-west. North-south roads are called avenues (like Tampa Avenue and Zelzah Avenue). East-west roads are called streets (like Nordhoff Street and Vanowen Street). Major roads are called boulevards (like Reseda Boulevard and Victory Boulevard). The exception is Sherman Way.

It’s not like Orange County where streets run at funny angles and change names in every city. (Depending on where you are, one street is called Segerstrom, Dyer, Barranca, or Muirlands.) And why are there two intersections of Main and MacArthur a few miles of each other? Sure, Orange County has master planned communities, but the Valley did a better job of planning streets.

Speaking of getting around…

There is no scene more spectacular than driving north on the 405 over Sepulveda Pass and seeing the Valley spread out in front of you. Especially at night, when the neat grid of streets are lit up in gold. It was the perfect “welcome home” after a long day at UCLA, returning from a flight at LAX, or from when I commuted between Irvine and Reseda during my first four months at AST.

It’s not that Orange County doesn’t have Jewish people. (I married one.) It’s just that it’s not as easy to find fellow Jews unless you go to Newport Beach. It doesn’t help that Christians are more in our face here. We live down the road from Saddleback Church, and it seems that almost everyone from our community goes there. And when Saddleback and Rick Warren aren’t in the news, Crystal Cathedral is, but for less-than-pleasant reasons.

The Valley seems to have a stronger and more prominent Jewish community. The synagogue where I had my bar mitzvah, Temple Aliyah, was a bus ride away. There’s an excellent Jewish store called Shalom House in Woodland Hills.  Tarzana has a great Kosher deli called Mort’s with a bakery next door called Bea’s that sells fresh challah. If that isn’t Jewish enough, Fairfax is just a short drive over the freeway.

It was certainly easier to be Jewish in the Valley than it is in Orange County. Sure, I faced my share of antisemitism there, but I’ve faced more of it (along with more proselytizing) here.

Growing up in the Valley, there was only one baseball team — The Dodgers. And by the Dodgers, I mean the O’Malley Dodgers. The Tommy Lasorda “bleed Dodger blue” Dodgers. The bring your transistor radio to the ballpark to listen to Vin Scully Dodgers. The Dodgers where you can take your family to the ballpark and not worry that you’re risking your lives. The Dodgers where you can buy a set of four loge seats, Dodger dogs, soft drinks, and bags of peanuts (that get tossed to you) without having to take out a second mortgage. I want those Dodgers back. Kick out the McCourts and get someone who knows how to run a baseball team. While you’re at it, bring back the Rams. St. Louis Rams, indeed!

There are parts of Reseda where I wouldn’t want to go, even in the daytime. Still, it is my hometown. I moved to our house on Amigo Avenue when I was two and lived there for 23 years. Reseda was where I grew up, where I went to school, and where I worked at the Carl’s Jr. on Sherman Way between Reseda and Wilbur. I could walk up Reseda Boulevard and tell you about the places that used to be there: Reseda Bowl, Rancho Chevrolet, the fishing store where a friend tied lures for fly fishing. On Sherman Way, there was the JC Penney where my mom bought my Scout uniforms, the Country Club where I saw Gang of Four, and Be-Bop Records that carried imports and cutting-edge punk they didn’t have at Licorice Pizza.

And there is Reseda High School. I have so many memories from there: performing in the musicals, writing for the Regent Review and the Buji creative writing magazine, and cheering for the Regents in whatever sport they were playing.

Growing up in the Valley has given me some great memories. I hope that 32 years from now, my daughter and her friends will remember growing up here as fondly as I recall my years in Reseda.