“One small step for man…” 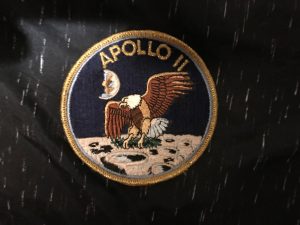 Last week, one of my coworkers showed off a Lego model he built of the Apollo 11 lunar lander. He was lending it to a local library as part of their 50th anniversary commemoration of the first moonwalk. As I talked with my colleagues, I realized I was the only one who watched Apollo 11 live on TV. For the rest of them, including the person who built the model, Apollo 11 was something they only read about in history books.

For those of you who also only know about Apollo 11 from history or the conspiracy theories that Stanley Kubrick faked it, here is my Apollo 11 story and what the moon landing meant to an eight-year-old boy.

The Space Race of the 1960s inspired my childhood for as long as I could remember. One of my first toys was a GI Joe in a spacesuit and a Mercury capsule. I also had a set of Major Matt Mason toys. One of the few things my dad and I did together was build a four-foot tall model of a Saturn V rocket, complete with a removable command module and lunar lander. Dad, who was an excellent artist, painted the parts. I assembled the easy components while he did more difficult pieces.

My fascination with space was furthered by all the aerospace development happening in the San Fernando Valley where I grew up. We had Lockheed, Rockwell, and Rocketdyne, and rocket engines were tested in nearby canyons. Most of us knew someone who worked for a NASA program.

We weren’t just inspired by our successes. We knew the dangers of spaceflight. The Liberty Bell 7 capsule that sunk after splashdown with Gus Grissom barely escaping. The Gemini 8 mission that spun out of control and almost cost the lives of Neil Armstrong and Dave Scott. And the heartbreak of Apollo 1. Spaceflight required courage, especially the courage to keep going when the worst happens.

Finally, the day of moon landing arrived. Our family stayed in front of the TV all day on July 20, 1969. I don’t recall what channel we watched. It might have been CBS with Walter Cronkite or NBC with Huntley and Brinkley. I remember a jazz pianist was playing an original composition about the moon as we waited for the landing. We were transfixed by every moment. In a decade when news frequently broke in about an assassination or the Vietnam War, we were happy to see good news for a change.

My parents let my brother and I stay up to watch the moonwalk. The blurry black-and-white images finally appeared with “Live from the Moon” at the bottom of the screen. We watched Neil Armstrong descend the ladder and place his foot on the moon. While people still scrutinize what he actually said, I understood what he meant: “That’s one small step for man, one giant leap for mankind.” Those words struck the right tone as we watched in wonder and awe as humans trod on another celestial body.

I felt the same wonder and awe 20 years later when Neil Armstrong spoke at a company meeting. Our company was going through a hard time with losses and layoffs, and they brought in Neil Armstrong to inspire us. And he did. But I found myself watching his image on the projection screen because I couldn’t believe I was seeing in person the first man who walked on the moon!

Apollo 11 was an experience I would never have again. It was more than a great human achievement and our nation winning the Space Race. It was something we did together. As an eight-year-old, I felt a future was being created that I could be a part of. At a divisive time, Apollo 11 brought us together. While some questioned whether the money could have been better spent to solve problems on earth, space exploration made us believe that solutions are possible. We imagined ourselves overcoming greed, racism, and violence, just as we learned to overcome gravity. Apollo 11 dared us to dream and achieve great things. It’s a spirit we need again.