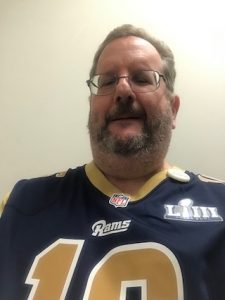 My wife suggested that I get a souvenir to celebrate the Rams making it to Super Bowl LIII. I told her I would wait until after the game since I already had Rams shirts to wear. I figured if the Rams won, I would rather get the World Champions gear. If they lost, I could pick up their stuff for half-price.

The Rams lost, and I was right: they had Rams stuff for half-price.

But why would I buy the jersey of the losing team? Specifically, why would I wear Jared Goff’s when he struggled during the game?  (And yes, I know the Rams didn’t wear that style of uniform in the Super Bowl.) Why would I break my own rule about buying a sports jersey when players get traded, teams move, and designs change?

Because the Rams’ loss in Super Bowl LIII reflects what I believe about achievement.

I never played football outside of the schoolyard and video games, but I know how it feels to lose. I’ve lost competitions, had book submissions rejected, was forced out of jobs, had health scares, and faced numerous setbacks.

And like the New Orleans Saints, I had a bad call against me that caused me to lose something I probably should have won. At a speech contest, the district governor read the results wrong. A first-place trophy that might have been mine wound up going to someone else.

When you face defeat, people will say you’re not good enough, you don’t deserve to be there, and you should cut your losses and give up. They will mock you as a failure and call your performance pathetic. You start believing this too. You get frustrated, consider your efforts futile, and think you’re making a fool of yourself. Quitting becomes a viable option.

Then you remember what separates winners from also-rans is how they recover from defeat. You learn from your mistakes, shrug off the attacks, shut off the self-doubt, regain your confidence, and get back to work.

It’s easy to celebrate victories. What we forget is the struggle it took to achieve them. Our losses push us to do better. They challenge us to learn more, work harder, and try different approaches. Through them, we gain experience. And when we win, our losses provide milestones to show us how far we’ve come. We shouldn’t look at losses or setbacks with shame, but see them as necessary steps in our progress.

So, I’m proud to wear the losing jersey. It’s more than just loyalty to a childhood team I reconnected with. It reminds me that defeat is essential to success.