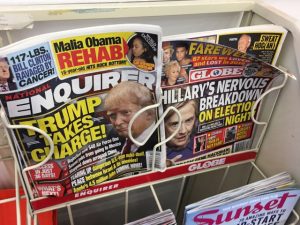 I’ve been getting a lot of visits to my speech “Don’t Believe Everything You Read,” possibly because of all the talk about fake news. (You may also want to see my post “Anatomy of a hoax” for more information.) The real problem with fake news is that it makes us distrustful of any news source. It used to be clear which sources can be relied upon and which ones can’t. It’s harder now when questionable content shows up on what are considered credible news sources. Usually, we can depend on critical thinking and further research to sift through what is factual and what isn’t. But another aspect of fake news makes it hard for us to do even that.

It’s when people define fake news as “anything I disagree with.”

I experienced this not too long ago when I passed along some news that I found was well documented and disturbing. The response: “Oh, come on, Matthew! That’s fake news!” As more details about the story were passed along, the stronger the accusations of “fake news” got. It’s not the typical “He’s lying!” defense we used when we were five, and our brother accused us of breaking our mother’s favorite vase (because we did). This calls into question not just the information, but the whole process of gathering information. It disarms any effort to refute the story because, hey, that’s fake news too!

This is a consequence of the bubbles we envelope ourselves in through social media and partisan news sources. When we are constantly told that our position is right and suspicions are justified (whether the story is true or not), the minute something comes along that questions those ideas, we give it a violent rejection. Political ideology isn’t merely something we agree with. We invest our identity and self-worth in it. The most horrifying thought we can face is, “I might be wrong.” So, we’d rather label a piece of news “fake” so we don’t face the fear that it might be true.

The real way to battle fake news is to have the courage to say, “I might be wrong, and the other side might be right.” From that courage, we become willing to research, investigate other sources of information, engage in critical thinking, and come to a conclusion independent of how we align ourselves politically. And if our original position is proven to be correct, we can speak with the confidence of having supporting facts and understanding the opposing arguments enough to debate them. And if we are proven wrong, we don’t have to feel less of a person because we didn’t cling to our chosen ideology in that circumstance. We take pride that we’ve done the work and expanded our outlook.

We’re seeing this willingness to expand perspectives on TV, with Trevor Noah interviewing Tomi Lahren and Samantha Bee interviewing Glenn Beck. (And why do we have to keep turning to comedy shows for insight?) We should be just as willing as consumers of news and spreaders of information on social media. To battle fake news, we must pursue the truth — especially when it tells us things we don’t want to hear.