Why separation of church and state is a good thing 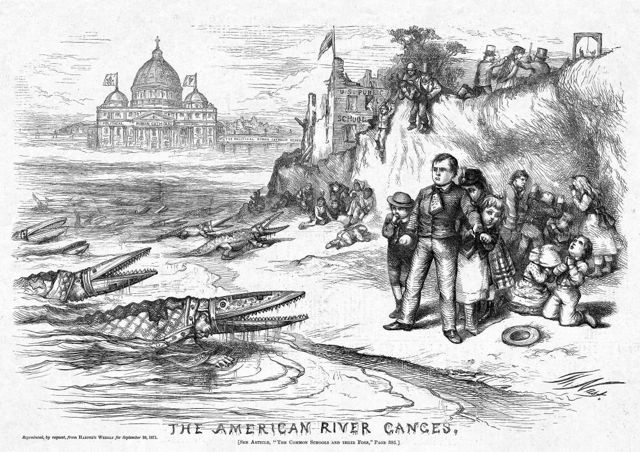 Dear Senator Santorum: On ABC’s “This Week,” you said, “I don’t believe in an America where the separation of church and state is absolute” and that President Kennedy’s 1960 campaign speech about this subject made you want to “throw up.” What you may not realize is that the establishment clause is designed to protect you as a Catholic, as well as everyone else.

I included the Thomas Nast drawing above as a reminder of why John F. Kennedy made his pronouncement. People of your faith did not always receive the acceptance you enjoy today. In fact, the United States has had a long history of anti-Catholicism. When Al Smith ran for president in 1928, anti-Catholic groups — including the Ku Klux Klan — ran hate-filled campaigns against him. They were driven by the baseless fear that a Catholic president would take orders from the Pope (who anti-Catholics considered the “Antichrist”) against the rights of all Americans. For example, the Daytona Beach, Florida school board required every student to take a card home to their parents saying, “If Al Smith is elected president, you will not be able to have or read a bible [sic].”

And you think President Obama puts limits on your faith?

So, here is one way that the Constitution protects you: In 1922, voters in Oregon passed the Oregon Compulsory Education Act that required school-age children to attend only public school. This measure was backed by the Ku Klux Klan (yep, those folks again) with the plan to shut down parochial schools, but it would shut down private and military schools as well. This law was overturned by the United States Supreme Court in the 1925 Pierce v. Society of Sisters decision.  In writing the opinion of the Court, Associate Justice James Clark McReynolds said that “rights guaranteed by the Constitution may not be abridged by legislation which has no reasonable relation to some purpose within the competency of the State.” The ruling declared that parents have the right to choose the best education for their children and not to have it dictated by the government (especially those with a prejudice against a specific religion.)

When President Kennedy said, “I do not speak for my Church on public matters — and the Church does not speak for me,” he did not say, as you described it, “that people of faith have no role in the public square.” What he meant is that the separation of church and state gives people the freedom to believe what they choose without compulsion from either the church or state. The establishment clause ensures freedom of religion to individuals and religious institutions. This is what enables you, as a person of faith, to have the freedom to be in the public square in the first place.

I’m with President Kennedy on this one, Senator Santorum. I don’t want any religious institution directing my life, just as you don’t want the government to direct yours. The separation of church and state protects both of us. Losing that protection would make me sick to my stomach.