2017 Parody: I Want a Case of Jameson for Christmas 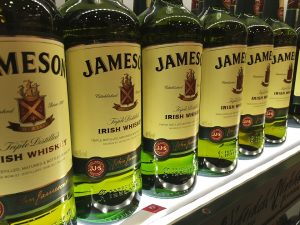 I wasn’t sure about doing a year-end parody because this year has gone beyond parody. But if there is ever a year when we need a laugh (and, if you’re so inclined, a good stiff drink), it’s this one.

My parody is inspired by the suitably creepy “I Want a Hippopotamus for Christmas.” (And after a few shots, my song might actually fit the melody.)

Soloist:
Oh I want a case of Jameson for Christmas.
Only lots of alcohol will do.
Cuervo is good, Jäger is fine,
But give me lots of liquor till I cannot feel my mind.

I want a case of Jameson for Christmas.
My Twitter feed is looking like the Reich.
The Russians hacked my ads. They say the news is fake.
It seems like 2017 was just one big mistake.

Because this year was endless chaos,
The worst that we can know.
But what do you expect when you happen to elect
A loudmouthed host of a reality show?

Chuck Schumer and Nancy Pelosi:
We want a case of Jameson for Christmas.
It’s only way this damn tax bill makes sense.

Mitch McConnell and Paul Ryan:
We only do what our donors tell us to.
We’re only helping billionaires; the hell with all of you.

Carmen Yulí Cruz:
We want food and water, lights and fuel for Christmas.
We don’t think Washington will mind, do you?

FEMA:
Nope, you don’t rate, because you’re not a state,
And we’ve been treating you like crap since 1898.

Kim Jong-Un
I’ve got bombs to aim at you guys.
Call me “Rocket Man.”
My idea of fun is make New York a hole-in-one
Once my missiles get far past Japan.

Theresa May:
I want a hard and soft Brexit for Christmas

Angela Merkel:
And a coalition where I’d keep my job.

Roy Moore:
But give me lots of teenage girls to play with and enjoy.

Soloist:
See the White House Christmas morning
Faces all a-frown.
When they open up their eyes and much to their surprise,
Santa Mueller’s come to town.

I want a case of Jameson for Christmas
So I can have a bit of Christmas cheer.
No “Despacito.” Or a fidget spinner.
Or a poke bowl. I’m going to drink my dinner.
That’s how I’m going to cope for three more years.