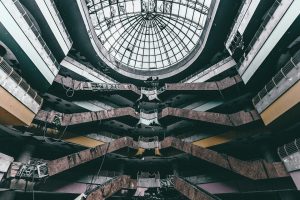 I was about to follow up my post about political fiction with one about dystopias. Then, I came across an excellent article about dystopian fiction by Tracy Larson. It’s well worth reading. I agree with her that “What if?” and believable character reactions are important considerations in creating a fictional dystopia. I would add one other thing to consider.

One person’s dystopia is another person’s utopia.

Think of the Inner Party in 1984 and The Capitol in The Hunger Games series. They benefitted from the suffering of others. Even in a disaster dystopia where humanity teeters on the verge of extinction, someone comes out ahead. In The Walking Dead, groups of survivors battle to determine who will be on top in a post-apocalyptic world. They use the disaster to their advantage and let other survivors perish so that they can preserve their place on the peak of a crumbling pyramid.

These fictional dystopias reveal something about real-life ones. If there were a zombie apocalypse or global pandemic, who would survive? Not the urban elite. A deadly and highly contagious virus could clear out Manhattan and San Francisco within days. The survivors would be the unemployed mechanic who can make any vehicle run, the backwoods survivalist with a large gun collection, and the aging hippie who can make medicines from plants, including the marijuana he tends in a secluded canyon. In a societal collapse, those on the bottom would find themselves on top.

Revolutions work the same way. The social order is inverted. In the French Revolution, the peasants and intellectuals lopped off the heads of the king and nobles who oppressed them. The same thing happened in Russia. The royals whose family ruled Russia with an iron fist for centuries found themselves at the receiving end of the Bolsheviks’ machine guns. The peasant and workers’ utopia became their former rulers’ dystopia.

The flipping of utopias and dystopias was portrayed in D.W. Griffith’s Birth of a Nation. (Yeah, we’re going there, but please stay with me.)

We look at that movie with revulsion today because of what its creators considered utopia and dystopia.

For Southern whites, utopia was when they had their plantations, cotillions, mint juleps, and what they considered an orderly way of life. When the Union came and killed their sons, laid waste to their fields, and not only stripped them of their “property,” they allowed them to vote and hold public office, that was their dystopia. In any dystopian story, we need heroes who can save the day and crush the tyrants. Those “heroes” wore white sheets and restored Southern “honor.”

For us, we find the Birth of a Nation’s views of dystopia and utopia abhorrent and completely backwards. A society where people are enslaved and dehumanized is a dystopia, not a utopia. We wouldn’t mourn for a repressive and exploitative society that, as another movie pointed out, had gone with the wind. We would cheer and weep happy tears when those slaves were freed, as we did with Roots and Twelve Years a Slave. A society where African Americans are respected as equals would be considered a utopia (as in a utopian science fiction series). And when those “heroes” from Birth of a Nation were able to reimpose their Jim Crow social order, it produced another dystopia of discrimination and violence.

A dystopia is a utopia for people whose values we abhor. We detest tyrants, racists, exploiters, the greedy, and the callously cruel. So we root for those who are abused and repressed, and we want them to rise up and topple those who persecute them. When they win, we call it a utopia — even though it will be a dystopia for those they deposed.

That’s why dystopian fiction shows our deepest values. It depicts a social order we feel is wrong and immoral, and we want to see it set right. One person’s dystopia is another person’s utopia. We want it to be a utopia for those whose values we admire and deserve to be on top.