Social media enables us to build communities around the world. A new writing community is Feed My Reads. Through them, I met English fantasy author Lucy McLaren, who recently interviewed me on her website. In this post, I return the favor—excuse me, favour—by interviewing Lucy. She will tell us about her writing journey and her upcoming novel Awakening: The Commune’s Curse, which is the start of a new fantasy trilogy. 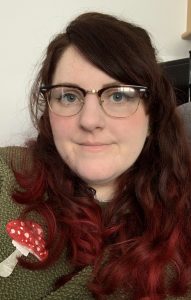 Tell us about yourself, where you’re from, and how you got into writing.

Hello! My name’s Lucy, I’m a counsellor and fantasy author from Essex, England. I live with my husband and young son, who I’m currently raising whilst attempting to continue with all things writing and book based. It’s been a steep learning curve!

I remember enjoying writing from a very young age. My most vivid memory of starting on fantasy stories specifically is being sat in the school library at age 11/12 and writing chapters, which I’d swap with my friends. That’s where I’d pinpoint my love of writing really taking off.

What books did you read as a child, and how did they inspire you?

As a child, I read Tamora Pierce’s Song of the Lioness Quartet, The Queen’s Thief series by Megan Whalen Turner, His Dark Materials by Philip Pullman, The Sword of Shadow series by J.V. Jones (admittedly an adult series which was too old for me, but I loved it then and still do). These all led me to fall in love with the fantasy genre, with their explorations of other worlds, animal companions (or daemons), strong-willed female characters. I hope those inspirations shine through in my book. I’ve tried to make it so, anyway.

When did you decide that you wanted to be a writer?

That actually came much later. I stopped writing for a long time from around 16 to my mid-twenties because I didn’t believe I was good enough. That makes me sad now because I get so much enjoyment from writing.

In terms of the idea of being a writer, I decided when I was about 27 and studying counselling at university that I was going to write a book. I had never finished one before and really wanted to prove to myself that I could. Once I’d written that book’s first draft (about 8 months later), I think that was the moment I actually thought I could be an actual, real writer. Here we are, three years later with that very book due for publication next year. I still have to pinch myself, to be honest, and my husband has to make me tell people that I’m a writer because it doesn’t feel like it’s truly happening!

Who helped you the most in starting your writing career?

My husband has been an incredible support. At first, it was a hobby and something he could see I was passionate about. When I told him I was going to be submitting the book out to agents and publishers, he really got behind me. On the days when rejections were coming in and I felt low or doubted myself, he encouraged me to keep going. If it wasn’t for his support, I would never have completed the book or continued to submit it out.

Another mention has to be my dear friend (and fellow author) Cindy van Wilder, who is a wonderful person and who has encouraged me in my writing ever since we met on Twitter three years ago.

Who are your favorite authors? How have they influenced your writing?

J.V. Jones is the earliest influence, as someone whose books I read very young. I remember falling in love with her vivid storytelling and three-dimensional, flawed characters. I think her way of writing really steered where my interests lay in terms of books I read now, and the style that I enjoy.

I’m always really drawn to character-driven stories and all of the writers I adore create such fantastic, realistic characters within their worlds. This has been a massive inspiration to me and something I strive for in my own writing.

You also talk about video games as examples of storytelling. Which video games do you feel tell the best stories?

Oh yes, I love video games which tell a story. Sometimes, the best video games simply tell a story, and you are just along for the journey. The best example of this would be Everybody’s Gone to the Rapture, which is a beautiful and heartbreaking game which I highly recommend to anyone. It only takes about 4 hours to finish, with you walking around and taking in everything that has happened to this quiet English countryside village, and it’s well worth the time.

I also love role-playing games such as The Witcher 3: Wild Hunt and Horizon: Zero Dawn. These both tell stories on a much larger scale and introduce the player to a huge world with a whole host of characters to interact with. They are incredibly immersive and drew me in for many, many hours.

I’m also a huge fan of The Last of Us series. Not the most original of stories, perhaps (viral outbreak, dystopian world riddled with zombies kind of thing), but, to me, the characters and their relationships with each other are what make these games incredible.

You write about fantasy. What attracts you to this genre?

You know, I think there’s something magical about fantasy that no other genre quite encapsulates. The worlds can be similar to our own or completely different, but the fantasy stories I connect with most are always in some way connected to the way we live. I like realistic portrayals of mental health and trauma, and explorations of issues we see within our society. Some people read to escape these elements, but I find that reading about them brings me closer to the heart of the story. 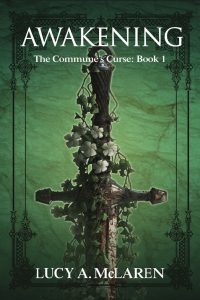 Tell us about your debut novel, Awakening: The Commune’s Curse Book 1.

Awakening: The Commune’s Curse Book 1 is a multi-POV, YA fantasy set in the Kingdom of Septima. The four viewpoint characters are Evelyn, Raif, Hector and Commander Sulemon. Evelyn finds herself reluctantly protecting Raif and his young sister Rose as they flee from Commander Sulemon, who works for The Commune, an authoritarian cult that essentially runs the kingdom. The Commune is interested in hunting down and taking in children born with ancient powers as a means of tightening their hold over Septima. When Rose reveals herself to have the strongest powers seen in decades, Evelyn and Raif seek aid and are offered shelter by Hector and his rebel group, who are fighting against the Commune’s rule.

Within the story, I’ve sought to accurately represent mental health issues such as anxiety and PTSD, as well as to explore contemporary issues such as how those who are sexually assaulted are treated by society. As a counsellor and someone who is passionate about these issues, I aimed to do this as sensitively as possible.

On your website, you have an “inspirational shot of Bamburgh Castle.” How does it inspire you, and how does it fit into your book? 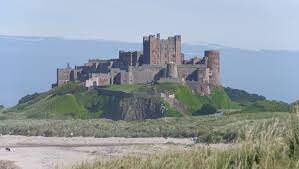 Oh yes, I love historical buildings like that. It inspires me, I suppose, in terms of when I’m creating the setting for my stories, because it helps me envision what a place would look like. I love exploring old sites and imagining the people who lived there, what they were like and how they went about their days. There’s a place in Awakening called Castleton which features a ruined castle, and I drew heavily from places like Bamburgh Castle when imagining that.

Worldbuilding is important in fantasy. How do you go about creating the world of your story?

Hmm, I’m not sure I have a set way of worldbuilding, actually. It is certainly important in fantasy, I agree, but I came up with the characters first for The Commune’s Curse series and the world seemed to build itself around them.

I have always tended to write my fantasy stories in similar kinds of places (what would be deemed medieval Europe) and I know that’s very popular in the genre. It may not be overly original, but it’s what I enjoy reading and so it’s what I enjoy writing. I have also created different cultures within the series that differ from the main Kingdom and who aren’t ruled by the Commune. These are explored more deeply in books two and three.

Another project I have on the backburner (dubbed my serial killer fantasy book) is set in a more Victorian-style world, and I’m really looking forward to getting back into writing that when I find the time!

Awakening: The Commune’s Curse Book 1 will be published by the Santa Fe Writers Project (SFWP). Tell us about your experience working with them.

It’s been fantastic. I found SFWP through their literary awards (which are opening up again soon, for anyone interested in submitting. I’d highly recommend it—check out their website). They later had an open call for fantasy stories, and I submitted an early draft of Awakening. I got some great feedback from the director, Andrew Gifford, who said it was a no BUT… and gave me pointers as to how I could tweak/improve the story. I re-worked my book, re-submitted and was offered a contract. I consider myself incredibly lucky to have found a publisher who connected with the first book I wrote.

I’ve learnt a huge amount in working with SFWP. Andrew is brilliant and gives excellent tips that have helped guide me—as a debut author in a crowded market, that has been invaluable. I’m still finding my feet, but I’m getting there. My editor, Nicole, worked with me to really polish the book up to a version that I am so very proud of. It’s so much more than I ever thought it could be, and that’s because of SFWP’s support of the project and of myself as an author.

What advice would you give to beginning writers?

Where can people learn more bout you and your writing?

Thank you for sharing your story with us. Look for Awakening: The Commune’s Curse Book 1 coming May 2022 on Amazon, the SFWP website, and bookstores everywhere.