How to survive a nuclear war

With tensions rising between the West and Russia over Ukraine, we’re again facing the threat of a nuclear war—something younger generations never had to deal with. As a Boomer, I can offer some guidance. I was still in diapers during the Cuban Missile Crisis, did duck-and-cover drills, gave a sigh of relief during detente, gasped when President Reagan joked about bombing Russia in five minutes, and watched Testament and The Day After. So, I know what it’s like to live under the shadow of nuclear annihilation.

The big question is as it was then: If there is a nuclear war, how do you survive it? I can answer it in a meme: 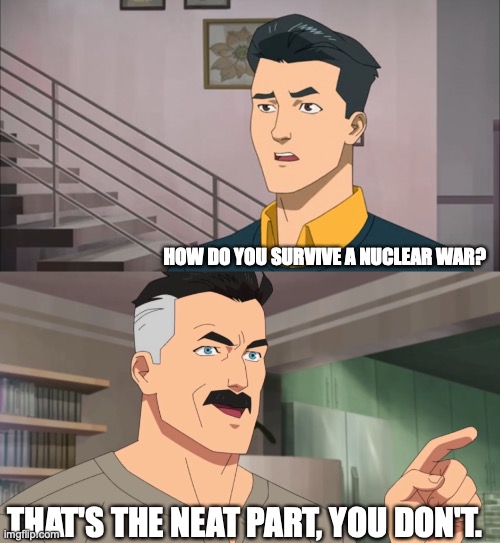 The best place to be when there is a nuclear strike is right under the blast site. You will be vaporized before you realize what happened. That’s because the further you are from the blast site, the more prolonged and miserable your death will be.

Close to the site, you will be mortally wounded by third-degree burns, debris, and intense radiation with no medical help available. Your suffering will be intense, but it won’t last long.

Further out, you will suffer from radiation poisoning. Your death will be long, horrible, and inevitable. And don’t bother going to a hospital. If you think ICUs are backed up now with COVID, imagine hospitals with limited if any electricity, staff shortages, no sanitation, and no supplies. You’re better off dying at home.

And if you survive the blasts and radiation? Your emergency supplies of water, food, ammunition, and medicine may last you for a while. But they will run out long before services can be restored. You can try to play the rugged individualist and take from others (until someone bigger and stronger takes from you). Or you can do what humans have always done and banded together to share resources and offer each other protection. But you will have to do this in a hostile environment. Nuclear winter will make it hard to grow crops. Drinkable water will be difficult to find. Game will be scarce or too irradiated to eat. You will have to contend with other desperate bands of survivors who would rather fight than help. You will have to survive without electricity, gasoline, gunpowder, and antibiotics. Between cold, starvation, and disease, most humans won’t survive that first winter—if humanity survives at all.

Those who do survive face the daunting task of rebuilding civilization from scratch. We will be at the same place we were after the Bronze Age Collapse and the Fall of the Western Roman Empire. We may be able to salvage pieces of our now ruined civilization. We may be able to reconstruct the knowledge we’ve lost. But it will take centuries for humanity to return to the state we are now, if we don’t find a more effective way of destroying ourselves before then.

The only way to survive a nuclear war is not to have one.

This is why we’re here today. Leaders of nuclear-armed nations recognized the horrible potential of these weapons and opted not to use them. We should be grateful the launch codes haven’t fallen into the hands of religious fanatics who welcome an apocalypse as a sign of their end times, the return of their savior, or part of some divine purification. We should be grateful that some accident or diplomatic slipup didn’t lead to a nuclear conflagration. We are here because, as Sting once told us, “The Russians love their children too.”

Boomers aren’t good for a lot of things, but listen to us when we warn you about the dangers of nuclear war. We lived in fear of one for most of our lives, and we don’t want to see our children and grandchildren go through another such threat. We have too many other dangers to deal with right now. When it comes to nuclear war, it’s best to follow the advice from the 80s movie WarGames, “The only winning move is not to play.”