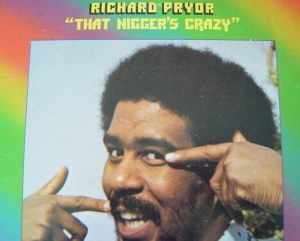 PewDiePie is the latest celebrity caught uttering the n-word. Unlike celebrity n-word eruptions in the past, this situation cannot be treated the same way. In the aftermath of Charlottesville, racists are emboldened. More racist material has been appearing, along with more racial violence. The n-word can no longer be dismissed as a casually tossed around lyric in hip-hop music or a primal grunt of an unenlightened past. It’s time we take an honest look at it.

We can start with a man who put that word on his album covers, Richard Pryor.

Those of us who grew up in the 1960s and 1970s are the first generation to be taught that using the word is wrong. Not merely impolite. Not something you can blurt out in anger. Not something you can use for laughs while wearing shoe polish and burnt cork. (My dad’s 1936 joke book had plenty of those types of jokes.) Completely, absolutely, unquestionably wrong.

Then Richard Pryor came along and confused us. He unintentionally created the lament, “If they can say it, why can’t we?”

The truth is that he hated that word too. It was another pain from his life he sought to deal with though comedy. He explained this in his autobiography Pryor Convictions (as reported in the New York Times):

Nigger. And so this one night I decided to make it my own. Nigger. I decided to take the sting out of it. Nigger. As if saying it over and over again would numb me and everybody else to its wretchedness. Nigger. Said it over and over like a preacher singing hallelujah…Saying it changed me, yes it did. It gave me strength, let me rise above…

But he stopped using it after he visited Africa in 1979. In his show Live from the Sunset Strip, he described his epiphany (includes NSFW language).

So, what should we do about that word?

We must realize that eliminating that word doesn’t eliminate the hateful feelings behind it. In fact, the most dangerous racists don’t use racial slurs. They know how to conceal their prejudices with reasonable, rational-sounding arguments. They talk about “law and order,” “heritage,” “civilization,” “traditional values,” and “shielding our children from corrupting influences.” They accused Barack Obama of not being a “real American” throughout his entire presidency and continue to do so. They say he’s a “crypto-Muslim” who “doesn’t share our values.” They demand, “Let’s see the birth certificate…No, the long-form birth certificate…No, not good enough! I still believe he was born in Kenya!”

This bigotry is what we should fight against. It’s hatred that wears a suit and speaks in an indoor voice so it can be invited on cable news shows. And when it gets tired of being polite, it wraps itself in the First Amendment as it spews its foaming-mouthed vitriol, calls it “free speech,” and dares us to normalize it.

How should we as writers fight it? We can take back that word and show it for what it really is: a despicable word used by despicable people to express despicable thoughts. We can then counter it by showing how people should be treated — with respect, dignity, acceptance, and appreciation. If you’re concerned about legitimizing the word, you don’t have to spell it all out.

Words matter. We need to choose ones that build people up and bring them together. But to do that, we must recognize the words that dehumanize and separate people. At a time when too many people utter divisive words, let’s use words in a way that advances justice and humanity.