Tell me your heroes, and you tell me who you are 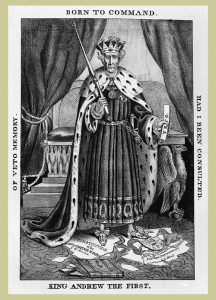 Let’s take a break from talking about musicals I performed in the 1970s and talk about a president from the 1830s.

What caught my attention about President Trump’s recent interview isn’t his comments about what President Andrew Jackson could have done about the Civil War. (We already know, which I’ll cover in a moment.) It’s that he clearly sees President Jackson as a hero. He paid homage at his grave, and he has Jackson’s portrait hung prominently in the Oval Office.

President Trump’s admiration of Jackson speaks volumes about who he is as a person. And there are lessons for all of us.

Andrew Jackson was an important figure in American history. So important, his portrait appears on all those bills that get dispensed at ATMs. He was a divisive figure as well. Just a cursory glance at his history on Wikipedia shows what a troubling role he had. The Trail of Tears, the dissolution of the Second Bank of the United States (which contributed to the Panic of 1837), and the rise of the spoils system. And we know what he would have done about the Civil War. He contributed to it as a slaveholder and slavery supporter, and through his actions in the Nullification Crisis and the Force Bill.

President Trump’s selection of President Andrew Jackson as a hero in itself speaks about the type of person he is. So does how he chooses to honor and emulate his role model. From his comments in the interview, it seems that he likes the idea of Andrew Jackson rather than the details of his history.

Compare this to the work Lin-Manuel Miranda did in Hamilton. The musical has alterations and omissions from the historical record, but these were conscious decisions based on Miranda’s research. We still get an accurate picture of Alexander Hamilton and the people around him — both their strengths and flaws. And by showing a more human picture of our Founders, instead of the idealized marble bust images of them, they become inspirational and relatable figures.

Our heroes tell others who we are — not only from the people we choose, but how we chose them, how and what we learned about them, and what attributes we emulate and work to overcome. We should think about President Trump’s choice and what it could mean for the policies he intends to pursue. But we should also take a moment to think about what our heroes say about us.