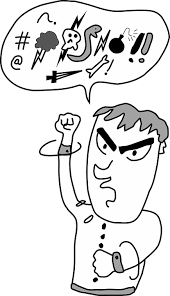 Presidents use profanity. What is different about what President Trump said is that he brought profanity into the public forum. The news media struggled to figure out how to handle it. Some spelled it out, others hyphenated it, others worked around it, while others ignored or excused it.

Does this mean that the rules for us as speakers and writers have changed? If it’s OK for the President of the United States, is it OK for the rest of us? (In order for us to discuss the subject, profanity will be used.)

We know profanity shouldn’t be part of our everyday conversation. It’s meant to be offensive, and it becomes obnoxious and meaningless when overused. We know it shouldn’t be used around children. It’s OK for Harland Williams to say “fuck” in his standup routines, but not when he’s voicing Bob in Puppy Dog Pals.

Beyond that, the rules are unclear.

Why is it OK for Samantha Bee to say “shit” on basic cable, but Stephen Colbert can’t on CBS? And neither of them can say “fuck” like Bill Maher can on HBO. And if you’ve ever seen clips from British comedy shows like Mock the Week, the BBC apparently lets you say almost anything. And what about when we’re the ones setting the rules when we write our own books and give our own speeches?

There are a few guidelines we can set for ourselves.

The first is consent. If someone goes to a comedy show or buys a book, they should know that they may be exposed to adult content. In this post, I told you I was going to use profanity before I started using it. You can then decide whether to read this post or not. (This is the problem I have with people demanding that bookstores and libraries make decisions adults should make for themselves.)

The second is accuracy. I appreciated the media who spelled out shithole, because that’s what the President said (to add to his previous fuck and pussy). Hyphens and asterisks are ridiculous. How hard is it to figure out what s–thole actually means? Spell out the word or don’t use it at all.

Finally is to remember that we give words meaning based on how we use them and what we express. We can use shithole to joke about our first apartment or to insult people from the Caribbean, Latin America, and Africa and say they’re not welcome in this country. The words used to denigrate others are the ones that are truly vulgar, whether they are considered profanity or not.

That’s why we must watch our language. This isn’t out of fussiness or political correctness, but because words have power and consequences. They reflect on our character and shape how people see us. We must choose our words with care.

Sometimes, fuck is the only word that fits. Usually, it isn’t. But whether you use profanity or not, use words with conscious thought, consideration of others, and a recognition of the outcome. No hyphens, asterisks, or bleeps can cover up for sloppy and cruel words.