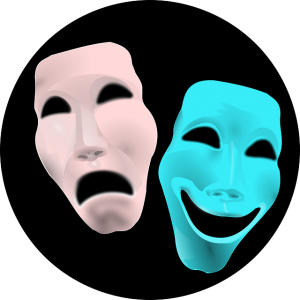 This post came from a couple of questions. The first was a tweet where someone asked why writers feel that they must always be serious. The second was a question from my wife who asked me, “Why did you find John Belushi so funny?”

The answers to both come from the same issue, comedy is hard to write.

Let’s use John Belushi as an example. It’s hard to explain why he is funny. You can watch him on the original Saturday Night Live and Animal House, but you can’t really pin down what it was about him that made people laugh. It’s easier to explain why something isn’t funny, such as the joke was offensive, corny, obscure, poorly delivered, or just not amusing.

Much of John Belushi’s humor depends on things that are non-verbal. His mannerisms, delivery, vocal tone, and appearance contributed to his comedy. These attributes can’t be scripted or described in words. His non-verbal comedy also gives it global appeal. Verbal comedy doesn’t translate well. An audience in Seoul loves a good pratfall, but an English-language pun won’t work when translated into Korean.

These are among the reasons why comedy is hard to write in narrative fiction.

Books also lack the immediacy of other forms of entertainment. It takes years from the time the writer tells the joke in a manuscript to the time the reader sees it — without the benefit of an audience or laugh track. Humor usually has a short shelf-life. Topical humor gets dated quickly. (Think of all the “Read my lips” references Disney stuck into Hercules nearly a decade after President George H.W. Bush said it.) What was funny 25 years ago can be considered offensive today.

So, it’s just easier to write something serious. Pain, death, and suffering are universal and evergreen. But relentless, unending misery makes for a dark and difficult read. We need to add contrast to the tone to give readers a chance to breathe and add emphasis to important scenes. So the writer on Twitter is correct that we need humor to add levity and lightness to a somber manuscript. How do you pull it off in narrative fiction?

I would use the same guidelines as using humor in speeches. Use it when it fits the story, is appropriate to the audience, and makes a point.

Humor works best when you draw upon personal experience. For example, my “Cell Phone Rudeness” speech still works after nearly 20 years. It describes irritating situations we continue to face, even though the Motorola flip-phone has been replaced with an iPhone XS. And when smartphones are replaced by cranial implants, we still have to deal with people not giving us their undivided attention and speaking about personal subjects at inopportune times and places. The story stays fresh because it remains relatable.

It helps to use clear descriptions to emulate the non-verbal parts of humor. Let readers build and play out the scene in their minds. What worked best in the funniest books I’ve read is absurdity. Take the personal irritations we all face and draw them to their illogical extreme. Dissonance adds to the comedy. I did this in another humorous speech, “The Cheese Cutting Contest.”

On the page, as well as the stage, we need to deliver humor with confidence. Trust the reader to get the joke, but structure the story so it continues to work if the reader doesn’t laugh.

Humor enhances stories and speeches, but only when used properly. This isn’t easy to do. Here, you need feedback from your beta readers and editors to see what works and what doesn’t. Remember that whether your writing is heavy or light, your goal is to create a great experience for your reader.