Junior high school in the 1970s 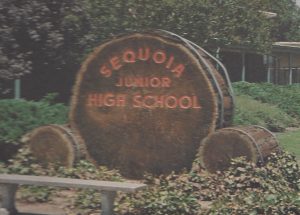 This coming weekend, members of my class from Sequoia Junior High School in Reseda are having a 40th anniversary reunion. I won’t be able to make it, unfortunately. Instead, I’d like to share some memories of being a junior high school student in the 1970s.

Actually, there was never a time in history when it was good to be a junior high school student. Ages 12 to 15 can be described with one word, awkward. Voices drop, acne blooms, and the race to see whose body can most resemble an adult’s begins. We get the awkward sex talk at a time when we feel the least sexy. It’s hard to impress “the la-a-a-dies” when your mom drives you around in her Olds 98 and talks about what “a big boy” you’re getting to be. 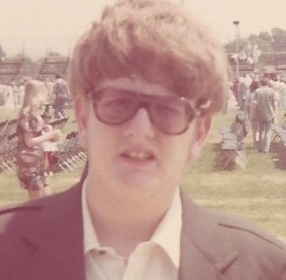 My junior high school years were difficult because I didn’t fit into the “macho man” pigeonhole. I wore glasses. I was shy. I wasn’t good at sports. I was good in choir and was moving up in Boy Scouts, but these weren’t considered “cool” activities. I couldn’t get my hair to grow in a stylish way. It just sat like a lump on my head. It’s hard to impress “the la-a-a-dies” when you look like a cross between a troll doll and Moe Howard.

I found an outlet in humor. I would get together with my friends Gino and Michael at the school library at lunch and make all sorts of humorous and downright politically incorrect cartoons, many of which would probably get a student expelled today. We read National Lampoon and listened to Dr. Demento on KMET.

Although Mom was a meat-and-potatoes Midwest Republican, she seemed fine with my changing tastes. She didn’t balk when my brother and I wanted to buy Richard Pryor and Cheech and Chong albums, and she let us stay up late to watch Saturday Night Live. I still clung to her values, obeyed her rules, and tried to live up to her expectations. So, she didn’t mind that I had a little seventies irreverence.

Looking back, I can see how junior high school shaped me. I learned that hard work is eventually rewarded. My most notable event in junior high school was my bar mitzvah. I had started late in Hebrew School because my Dad rebelled against his Orthodox upbringing and didn’t want us to go. It wasn’t until my parents separated that I could get started. I picked up on my studies quickly and was able to have my bar mitzvah ceremony while I was still 13. It remains one of my proudest moments. I got a lot of praise and well-wishes from my teachers and friends. For a while, I felt cool.

Sequoia Junior High School no longer exists. Thirty years ago, it was converted to a magnet school called the Sherman Oaks Center for Enriched Studies. Since it includes middle school grades, no doubt there are students there who are going through the same awkwardness we did 40 years ago. And if you’re a SOCES student going through those moments, we as former students of that campus can assure you that you’ll get through them. We also hope that 40 years from now, you’ll have happy memories of accomplishments and triumphs that made you feel cool.