So, who do you like in the World Series?

As a Dodgers fan, I should wish a pox on both the Yankees and Phillies in the World Series. At least, I should hope they freeze to death trying to play a summer game in November. (Seriously, Bud? You were probably wishing for a Freeway Series in sunny Southern California, weren’t you?)

If you followed the Dodgers in the late seventies, you remember the drill: We’d play the Phillies for the National League title against cursed Mike Schmidt and Steve Carlton. We’d play a nail-biting five-game series. Then, we’d go to the World Series, only to lose to the Yankees with – ugh – Reggie Jackson.

Reggie did win some love from me when he became an Angel and helped us win AL West titles in the eighties. I had to reconsider my feelings about the Yankees earlier this year because of this: 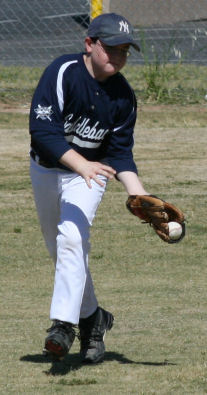 Yes, that is my son with the interlocking N and Y on his cap.

Still, it took some work to get me to care about the “Evil Empire.” I watched The Pride of the Yankees

, saw videos of Thurman Munson and Roger Maris, and listened to quotes from Yogi Berra. (You can’t be in a bad mood listening to Yogi Berra.) Jane Heller’s book helped too. All that didn’t quite block out the George Steinbrenner/A-Rod odor, but I could learn to love the Yankees. At least until they play the Dodgers or Angels.

As for the Phillies, they turned down a logo I submitted for a 100th birthday contest they had in 1983. So, sorry Phils. It’s Yankees in six.