The other side of gratitude 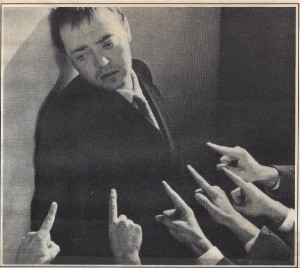 Guilt has negative connotations, which is understandable because it can be destructive when used improperly or manipulatively. However, the right kind of guilt can be beneficial for us and the people we care about. Just like gratitude, guilt reminds us of our responsibility to others.

To explain, let’s look at why guilt has been so maligned these days.

During my childhood in the 1960s and 1970s, guilt and shame were the most powerful tools in the parental toolbox. They were more effective than corporal punishment. The pain of a spanking went away, but guilt and shame stuck with you. You could hear your parents (and God) scold you even when you were by yourself. In that respect, guilt and shame were effective methods of control. Think of all the times that Jiminy Cricket voice kept you from getting into trouble.

Guilt and shame can also cause deep emotional scars, which is why the New Age movement attacked them vigorously in the late 1980s. On the plus side, New Age had valuable things to say about self-care and self-protection. However, those messages can be abused into justifying selfish behavior and a rejection of responsibility for others. (“I refuse to be codependent on my dysfunctional family! I have to heal my wounded inner child!”) By demonizing guilt wholesale, some New Age followers turned self-care into selfishness. To them, New Age was Randism served with tofu and sprouts.

Guilt can be emotionally painful, but we need that pain to prevent ourselves from hurting others, especially those we love. Guilt can keep us from committing immoral and illegal acts. We’re not only fearful of getting caught, but we’re afraid of disappointing others by doing something they told us is wrong. Guilt relates to gratitude because both remind us of our responsibilities to others. Gratitude reminds us to appreciate the good others do for us, and guilt reminds us of the good we need to do for others. We cannot receive without giving. Guilt reminds us of the consequences when we fail to give.

The Lion King provides a perfect example of the good and bad forms of guilt and the consequences for ignoring guilt entirely. Scar used guilt to manipulate Simba into running away. Simba then tried to shake off the feelings of guilt by adopting a Hakuna Matata attitude. Then, Simba started feeling another type of guilt — remorse over disappointing his father, Nala, and Rafiki. That guilt drove him to face his responsibilities and save the Pride Lands.

The only way to avoid the pain of guilt is to do the right thing. Doing what’s right can also help you resist the manipulative uses of guilt. Both gratitude and guilt remind us that we are not alone. We have connections that can support and sustain us but only if we give back and fulfill our responsibilities in return.

So, if you feel guilty because of something you failed to do or because you hurt someone, don’t ignore that pain or write it off as a dysfunctional feeling. Use that emotion, as painful as it is, to motivate you to make things right.