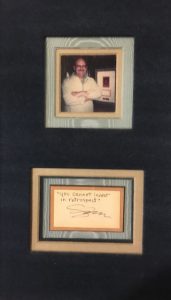 My dad died on August 31, 1986. This week not only marks the 30th anniversary of his death, I’m now as old as he was when he died. This has given me a lot to think about.

I didn’t have a good relationship with my dad when he was alive, and I had a hard time reconciling my feelings about him after he was gone. I was angry with him for not playing a bigger role in my life and not giving me guidance and support in becoming a man. But as I became a parent myself, I realized how hard it is, especially balancing the responsibilities of home and career. I recognized that my dad and I did have some good moments together, and we were able to connect weeks before his death. In time, I came to forgive him.

Today, I’ve been struggling with challenges of my own. They’ve forced me to question whether I’ve learned from my dad’s mistakes with parenting, and if I fell short of being the father I wanted to be. I haven’t been burdened with the serious health problems my parents and grandfathers have had, but I’m passing through my fifties with trepidation. I ask myself if I can make things right and if I have enough time to do so.

For these and many other reasons, I’ve never agreed with my dad’s favorite saying, “You cannot invest in retrospect.” If you don’t know where you’ve been and why it brought you to where you are, you won’t know how to move forward. You shouldn’t live in the past, but you can’t ignore it. You can learn from it and use it to make things better in the present and future.

This anniversary of my dad’s death has given me the opportunity to reflect. Right now, I’m left with more questions than answers. I hope that by looking back, I can understand enough to help answer those questions. At times like these, you need to invest in retrospect.