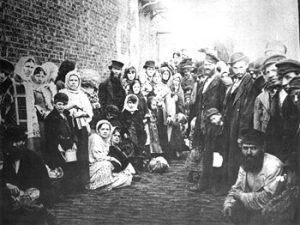 Here’s another entry in the “life imitating art” file. I finished one of my Fun A Day projects, an outline for a new book series. (You can read it on Google Drive and give your feedback to it by posting comments below.) I then saw a mournful tweet from a fellow writer that ties to a theme in my story.

She wondered if it is too late for the United States, and if she should she seek asylum elsewhere. Here is my reply.

My ancestors, like the people shown in the picture, fled Russia during the pogroms in the late nineteenth and early twentieth centuries. They had no choice but to leave. Staying meant death. Same was true for other immigrants who left crushing poverty, discrimination, persecution, and war.

But they had a place they could go. America was their Land of Opportunity, the Shining City on the Hill, the Promised Land where Lady Liberty lights her lamp beside the golden door. Although the reality was not what they imagined, they knew that being here was better than the places they left. The United States gave them hope for a better life. That hope still draws immigrants to come here, even as that golden door is being closed.

But if America falls to tyranny, corruption, and racism, where are people going to go? Australia is on fire. Europe and Latin America experience the same cruel populism as here. Canada can just as easily veer to the right. If the United States relinquishes its role as leader of the free world and defender of human rights and freedom, who will pick it up? Luxembourg?

In my novel series, I invented a country called Doria that could pick up that mantle. The existence of that country gives my main character the option to leave the United States. But Doria doesn’t exist in the real world. If flight is not an option, we have to fight. If we don’t make America the country we tell ourselves we are, there is no hope for the rest of the world.

Here’s where fiction can help. It creates an image of what we want our country to be—and what we want to avoid. It clarifies our values and helps us identify what is right and wrong. In difficult times, fiction offers and hope. As my daughter told me this about the fantasy series she read in her youth, “A lot of millennials and Gen Z’ers call back to those series for comfort during these hard times.”

As Americans, we have no choice but to fight. One way is through fiction. By creating a fictional country, I hope it will inspire others to create a more just, hopeful, inclusive, constructive, and freer nation and world.