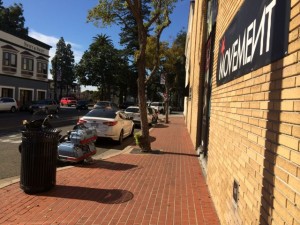 Throughout Reseda this month, there have been signs on vacant buildings saying, “Put a bookstore here” and “Put a cool cafe here.” But what would Reseda look like when the vacant storefronts have used record stores and art galleries? Let me show you around Orange Plaza.

Orange Plaza is one of the go-to destinations in Orange County. It’s a hip collection of antique shops, vintage clothing stores, and unique cafes. People like to go there to shop, explore, and dine. It’s a great place for people to take pictures. (A video camera crew was wrapping up when we got there.)

What gives Orange Plaza its charm is how it reused its old buildings, some of them over 100 years old. Part of an old bank became a Starbucks. Another bank from the 1960s became a clothing store. An old movie theater became a church. The old architecture even made a Radio Shack look charming.

Orange Plaza shows how an older area that might have been left vacant and neglected can become revitalized and popular. What was done in Orange can be done in Reseda.