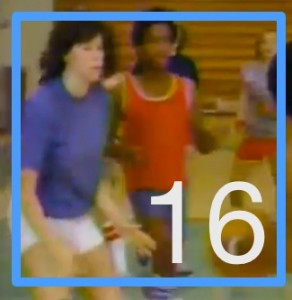 I remember James at 16 for two reasons: 1. Three members of our Reseda High girls’ basketball team appeared in an episode (playing basketball to the Bee Gee’s “You Should Be Dancing,” no less) and 2. The infamous episode with James and the Swedish exchange student. The latter was a source of a scathing editorial in the Regent Review about how laughably unrealistic its portrayal of teen love is.

So why do TV shows and movies get teenagers wrong?

One thing I have to give credit to James at 16 for: teenagers were played by actual teenagers. It’s not like Glee where teenagers are played by twenty-somethings. It’s also hard to convince me that Jennifer Lawrence looks like a teenage Katniss Everdeen when she appears in another movie a few months later playing a wife who was probably in her forties.

Twenty-somethings do not look like teenagers! I don’t care how much makeup you put on them. Teenagers are still growing into their bodies and faces. Boys’ facial hair, if any, is usually spotty. And there is the bane of all teenagers — acne. Teenagers have a distinctive look, and it’s not the look of a 27-year-old.

I know it’s a pain to use child actors since you have to provide tutoring, follow strict on-set rules, deal with changing voices and bodies, and run the risk of them turning into complete basket cases when they grow up. But using twenty-somethings decreases the authenticity. And speaking of authenticity…

The Teen Love is All Wrong

Do you remember your first love? Obviously, most folks in Hollywood don’t.

Teen love is awkward, moody, insecure, and unstable. Teens spend half the time figuring out what to say, and other half kicking themselves for what they just said. It can leave lovers feel like floating on air one moment and crashing into a cliff the next. Just as I get frustrated seeing twenty-somethings playing teenagers, I get frustrated seeing teen romances played like adult romances with more nubile partners. Teen romances aren’t mature! You have to go through a few immature teen romances — or develop a lot of maturity in the teen romance you’re in — before you can gain the experience, self-assuredness, and communication skills to have an adult romance.

Then there’s the problem when the teen romance gets physical. You can’t really show teens getting too physical because, well, it’s illegal. That’s probably why in that Glee “Hey, everybody, we’re all going to get laid” episode, the characters who were planning to deploy their genitalia announced that they’re 18.

Of course, you don’t have to show lovers in the act anyway. The emotional aspects are the most important. There’s the rush of passion along with “I can’t believe I actually did that” and the fear about what will happen to their relationship after it happened. It’s the insecurity, awkwardness, and the surprise of it all that many depictions of teen love lack.

Teenagers Aren’t Allowed to be Teenagers

Another praiseworthy aspect of James at 16 is that it shows teenagers dealing with teenage problems. They weren’t dressing up as superheroes to beat up bad guys. They weren’t trying to save the world from evil aliens, evil wizards, or evil authoritarian regimes. Sure, these fantasies provide wish fulfillment. Who wouldn’t like to take a break from homework and cheerleader practice to battle some super villain?

Teenage life is dramatic enough, and it has more than its share of problems — some of them life-threatening. A good teen story with realistic characters, situations, and romance could do more than fulfill some fantasy. It can help teens find the inspiration and solutions for their real problems.